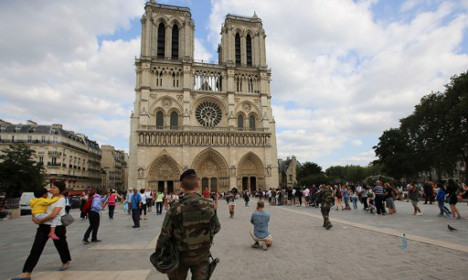 Photo: AFP
The couple was picked up late on Tuesday night near Montargis, about 110 kilometres south of Paris, a police source told AFP.
Their detention raises to four the number of people held in connection with the suspect car, an abandoned Peugeot 607 which was parked several hundred metres from Notre Dame cathedral in Paris.
The first couple, who were detained at a service station on a road in southern France, were known to the security services for having links to radical Islamists.
The daughter of the car's owner, described by her father as being radicalised, is also wanted for questioning, police said.
Police found the vehicle on Sunday morning. The car's hazard lights were flashing, it had no registration plates, and it contained seven gas cylinders, one of which was empty.

No detonators were found inside the vehicle.
The car was parked on the Quai de Montebello in the fifth arrondissement of Paris, which is just a narrow stretch of water away from the Notre Dame Cathedral
The cathedral is one of Paris's most visited landmarks attracting 13 million visitors each year. Photo: Google Maps
The car also contained a book with Arabic writing, reported Le Parisien newspaper.
Anti-terror police and the French General Directorate for Internal Security (DGSI) have launched an investigation.
France remains on high alert for terrorism after a series of attacks across the country since January last year, most recently after 86 people were killed in Nice when a truck driver deliberately drove into a crowd of Bastille Day revellers. Isis said the truck was driven by one of its followers.
Less than two weeks later, two young jihadists murdered a priest near the northern city of Rouen.
Isis also claimed responsibility for the November 2015 attacks on Paris that killed 130 people and injured hundreds.
The head of France's DGSI domestic intelligence service, Patrick Calvar, warned in May of a “new form of attack” in which explosive devices would be left near sites that attract large crowds.