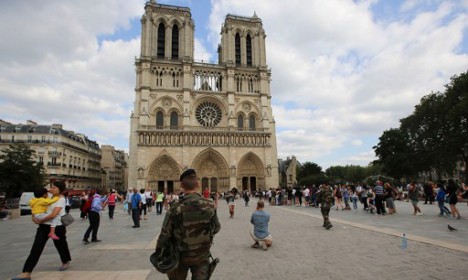 The three women arrested, aged between 19 and 39, were “radicalized fanatics” who were preparing “new violent.. and imminent actions”, Interior Minister Bernard Cazeneuve said.

The woman who was shot was a daughter of the car's owner. All three were seized together in Boussy-Saint-Antoine, south of Paris, an inquiry source said.

A police officer also suffered a knife wound during the arrest, the source added.

Four people — two brothers and their girlfriends — were already in custody over the discovery.

A 34-year-old man and a 29-year-old woman, the first couple arrested, have been held since Tuesday and are known to the security services for links to radical Islamists.

The man's brother and his girlfriend, both aged 26, were arrested late Wednesday, the source said.

Police said earlier they were searching for the two daughters of the owner of the grey Peugeot 607 that was found abandoned on Sunday near Notre Dame cathedral, which draws millions of visitors every year.

They have both been described as “radicalised”.

A bar employee working near Notre Dame had first raised the alert on Sunday after noticing a gas cylinder on the back seat of the parked car, police said.

The car had no number plates and its hazard lights were flashing.

Although the cylinder on the back seat was empty, five full cylinders were discovered in the boot of the car.

Three bottles of diesel fuel were also discovered in the vehicle, but police found no detonators.

France is on high alert following a string of jihadist attacks, including last November's coordinated bloodshed in which Islamic State extremists killed 130 people.

Speaking on Thursday, President Francois Hollande referred to attack plots that have been foiled “in recent days”, without elaborating.

“If it was an attack plot, the method was very strange,” a police source said Thursday.

Photographs of the car after it was discovered showed its boot open and the gas cylinders placed on the ground in a quiet side street opposite the cathedral.

Cazeneuve said on Wednesday the intentions of those arrested were as yet unknown.