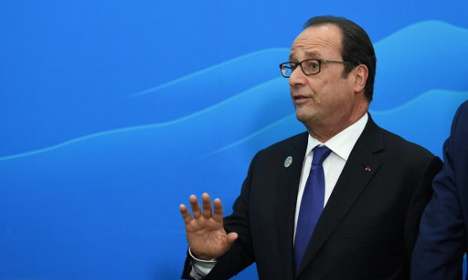 Photo: AFP
Already France's least-loved president, Hollande would be routed in the first round of voting, the survey for newspaper Le Figaro and TV news channel LCI said.
The Socialist leader would get between 11 and 15 percent of the vote according to nine possible combinations of the various candidates, according to the poll by TNS Sofres-OnePoint.
The figures suggest the run-off vote would be contested between the conservative Republicans party and the far-right National Front, a scenario last seen in 2002.
The poll was conducted between September 2 and 5 among 1,006 voters.
Hollande, mired in deep unpopularity over his handling of the economy, has yet to announce whether he will run for a second term.
In a book published month, he was quoted as saying he had “the desire” to run, but would not put his name forward “if the signs are that it could not lead to a possibility of victory.”
Under France's presidential system, if no one garners an absolute majority in the first round, the two front-runners participate in a runoff.
On the right, the Republicans will hold primaries in November that are likely to be a two-horse race between former president Nicolas Sarkozy and former premier Alain Juppe.
The National Front, meanwhile, will be championed by Marine Le Pen, the daughter of the party's outspoken founder, Jean-Marie Le Pen.
The survey found that Le Pen and either Sarkozy or Juppe would qualify for the second round on the basis of current voting intentions.
Juppe would pick up 33 percent and Le Pen 29 percent in one first-round scenario. In another, Sarkozy would reap 27 percent and Le Pen 29 percent.
Hollande's former economy minister, 38-year-old Emmanuel Macron, who quit on Tuesday and has hinted he will run, would gain between 15 and 20 percent of the vote, the survey said.
Jean-Luc Melenchon, of the Left Party, would get between 10 and 13 percent.
The first round of voting takes place on April 23rd, with the runoff on May 7th.