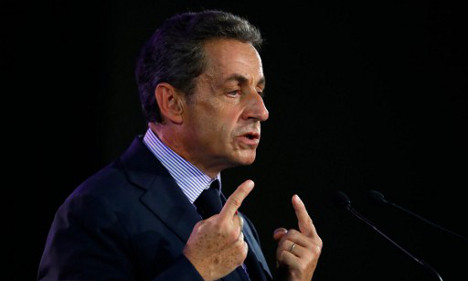 Photo: AFP
“No controversy, no manoeuvering, no manipulation — however shameful it may be — will deter me from my absolute determination to bring about a change in power,” Sarkozy said.
It was his first public reaction to what some analysts describe as a major blow to his hopes to return to office in next year's elections.
“I like people who have their ups and downs, who don't complain, who grit their teeth,” he added in a speech in Poissy, a western Paris suburb.
The 61-year-old rightwinger, president from 2007-2012, had seen his poll ratings rise recently after taking a hard line on Islam and immigration.
Judges may rule as early as October on whether he will face trial.
If so, that would be a headache for his campaign, as the decision would occur in the runup to presidential primaries in his party, the Republicans.
The campaign financing case is one of several investigations which have dogged Sarkozy since he left office.
It centres on allegations that false accounting was used to conceal campaign overspending by his office in the 2012 presidential elections.
Sarkozy's lawyer Thierry Herzog on Monday dismissed news that prosecutors had recommended a trial as a “shoddy new political manoeuvre”.
“Two years of investigation have shown (Sarkozy's) total lack of involvement” in the affair, Herzog said in a statement.
Along with Sarkozy, prosecutors are seeking a trial for 13 others.
The scandal has been dubbed the Bygmalion affair, after a public relations firm that organised some of Sarkozy's campaign appearances in 2012.