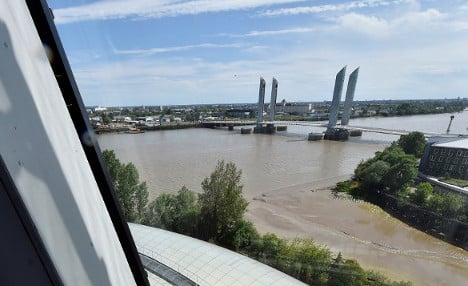 The Chaban-Delmas bridge seen from a window of the new Bordeaux's wine museum. Photo: AFP

We already knew the south western city of Bordeaux had a lot going for it.

It is surrounded by a legendary wine region of the same name, it's a Unesco World Heritage site, and it was ranked as Europe's top tourist destination last year.
Recent headlines lauded the city's stunning wine museum, described as a “Disneyland for adults, and the city is even home to the “best hospital in France”.
But Bordeaux has more going for it than that.

A recent survey of top-earning Parisians found that 56 percent of them would head to Bordeaux to start a new life if they ever left Paris – putting it well ahead of any other French city.

And many are already on the move, which explains why Bordeaux has the fastest-growing property prices of any major city in France.
The city is on the up and people, especially Parisians, are on the move to the south west. New high-speed train line brings Bordeaux closer to Paris
And much of the allure of Bordeaux is down to the fact that the city will soon be connected to Paris via a high-speed TGV train line, that by 2019 is expected to attract an additional 2.3 million passengers a year.
While the journey currently takes three hours and 14 minutes (194 minutes), July next year will see the launch of a 2-hour option, or 124 minutes to be exact.
Passengers could leave Bordeaux for an arrival time in Paris before 8am and get back in time for dinner and a glass of red.
Given that 22 percent of high earners already commute for more than an hour each way in Paris, the idea of living in the city synonymous with its surrounding wine region and continuing to work in the French capital may prove tempting for many.
But forget commuting, many are simply preferring to relocate.
Helen Robinson, one of the directors at local real estate agency Bordeaux and Beyond, says the new train line is already having an impact on the city.
“The train link means that large blue chip companies in Paris are wanting to relocate their staff to Bordeaux, and this has had an effect on the property prices in the city,” she tells The Local.
Bordeaux has seen property prices rise 7.1 percent in the past year alone, according to statistics from a recent survey.
The hike means that Bordeaux is now France's fourth most expensive city in which to buy property, behind Paris, Nice and Lyon.
But, importantly, it's still fairly cheap compared to the French capital –  €3,571 per square metre compared to €8,411 in Paris. Photo: AFP
Robinson says that Bordeaux homes have proven popular with overseas buyers too, notably from the UK, Belgium, and the Netherlands.
“Huge investments have turned Bordeaux into a vibrant, cosmopolitan city, which – in comparison to other major French cities like Paris, offers remarkably good value for money,” she says.
“Basically, once the city became more attractive, people became keener to invest, and the investors are keen to get in before it gets too gentrified and too expensive.”
Which suggests the new train line will also bring with it some downsides. British writer Scott Gilmour has called Bordeaux home for over ten years but says many people are now “apprehensive” about how life could change.

“With property prices shooting up, there is a fear that the average man on the street will be priced out of the city. Whilst the prospect of being able to reach Paris in just a couple of hours is exciting, it is also now a paradise for property developers,” Gilmour says.

Nevertheless he says Bordeaux has been great place to live for several years now and offers superb quality of life.

“Bordeaux is definitely a city on the up. But it hasn't happened overnight; it's been on the up for the last 10 or 15 years,” says Gilmour, who has recently published his first book.
He credits the town's mayor Alain Juppé, pictured below, with transforming the city from “sleepy and slightly stuffy provincial city to a great place to visit and live”. Photo: AFP
“There is a real sense that Bordeaux is the centre of a thriving and forward-thinking 21st century metropolis. Public transport is great and increasingly serving the suburbs, whilst more and more people are ditching their car for a bike.
And the writer is far from alone as an expat in the city, with Bordeaux boasting a thriving community of foreign nationals.
In fact, Bordeaux was named in a study by The Local this year as the third best place in France for foreigners to live, behind Rennes and only a fraction behind Nantes.
Bordeaux scored in the top brackets for its international air links, its nightlife, its green space and its public transport system.
In fact, the only category that let Bordeaux down was that it was the worst ranked city in France when it comes to its proximity to natural parks.
But with the stunning Atlantic coast just a short drive away next door and the spectacular Pyrennees mountains just down the road, it's only a small price to pay.