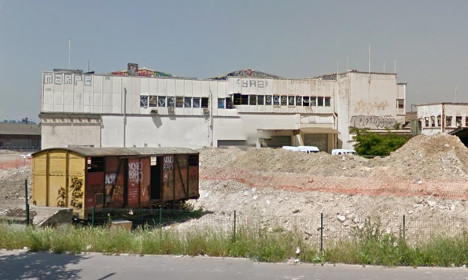 The fire comes as Paris announces details about a new migrant camp in the capital, on the site above. Photo: GoogleStreetView
The fire ignited at the migrant accommodation in Forges-les-Bains, south west of Paris, in the early hours of Tuesday morning, reported to BFM TV.
Interior Minister Bernard Cazeneuve said on Tuesday afternoon that all possible light will be shed on the matter to determine whether the fire was started voluntarily.
“If this hypothesis is confirmed, everything will be done to quickly arrest those behind this abject act and bring them to justice,” he said.
The building, which was set to house 90 migrants when it opens in October, had proved to be highly contentious in the local community.
The night before it was burned, authorities had held a meeting about the centre while around 100 locals protested outside. These protests continued until around 11pm, BFM TV reported, and just hours later the building caught fire.
The exact cause of the fire remains unconfirmed, but police have launched an investigation.
No injuries were reported.
The incident comes as the mayor of Paris announced that the first refugee camp in the capital will open in mid-October with an initial capacity of 400.
The centre, which will be housed in an old railway site in the north of Paris, aims to replace the makeshift camps that keep springing up around the city. Another view of the camp site in northern Paris. Photo: Google StreetView
Hidalgo, who had announced in May that the camp would be created, said asylum-seekers would be allowed stay there for “five to 10 days” and would receive medical and psychological care.
Hidalgo, a Socialist, said the €6.5-million ($7.2 million) Paris centre aimed to take asylum-seekers off the streets while they wait for a place in an official hostel set aside for refugees.
A second centre, for women and children only, will be opened in Ivry-sur-Seine to the southeast of Paris by the end of the year, she told a press conference.
The announcement comes as yet another makeshift camp housing several hundred people in northern Paris was dismismantled by police on Tuesday morning.