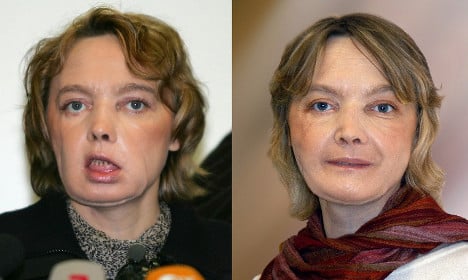 Dinoire was left badly disfigured in May 2005 when her Labrador attacked her and ripped off much of her face.

But less than a year later she became known world-wide when she revealed her new face after being given the first ever partial face transplant by surgeons at Amiens hospital.

The operation on the then 38-year-old was seen as the only choice for the surgeons, and it was deemed a success.

In her book Isabelle’s Kiss, Dinoire told how the surgery enabled her to eat, speak and smile normally.

But last winter Dinoire became ill after her body rejected a new skin graft. As a result she lost partial use of her lips.

She died on April 22nd, 2016, but her death was only announced on Tuesday by the hospital in Amiens.

The famous operation aimed at giving her a normal life took place on Sunday November 27th 2005.

During a 15-hour operation a mammoth team of surgeons, doctors and nurses worked together to try to ensure the surgery was a success.

Many in the medical community had been against the operation judging that Dinoire was in too fragile a state to be given a ground-breaking transplant. On the night she was bitten by her dog Tania, Dinoire had by her own admission taken a large amount of sleeping pills and was as a result numb to her pet’s attempts to wake her.

Describing the day she was injured in June 2005, Isabelle said: “When I came to, there was blood on the ground and I tried to get up – but I couldn't manage.

“I wasn't aware how bad I was, only that I had blood on my arms. I tried to light a cigarette but never got it to light.”

When she was presented to the world in February 2006 with her new face, Dinoire was able to say a few words albeit with difficulty.

“From the day of the operation I have a face like everyone else. I can open my mouth and eat. Recently, I feel my lips, my nose and my mouth. “

And to prove her point she picked up a glass of water, put it to her lips and took a sip.

Before then however she had been too scared to leave her room in the hospital due to the way she looked and only did so with a mask.

But although the operation and the subsequent grafts were deemed a near miracle, they proved only able to prolong Dinoire’s life for a number of years.