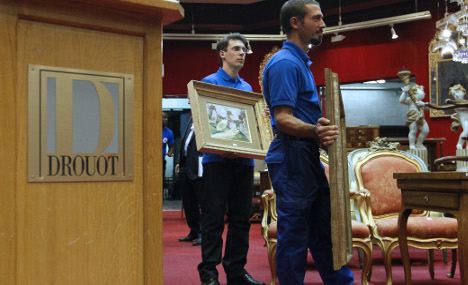 The former porters were found guilty of helping themselves to antiques, jewels and artworks including a Chagall painting and rare Ming dynasty porcelain items.

The porters — who transported and stored objects destined for sale by Drouot — were sentenced to up to three years in jail with 18 months suspended.

Three auctioneers were also convicted in the scam, with suspended prison sentences of up to 18 months plus fines of 25,000 euros ($28,000).

The lavish lifestyles of some of the porters had long been a source of suspicion. One apparently drove a Porsche 911 and the latest BMW cabriolet, while another allegedly bought a Paris bar with the fruits of his spoils.

The convicted men were among 43 porters and six auctioneers who were tried in March for gang-related theft, conspiracy and handling stolen goods.

Investigators alleged institutionalised theft by the porters, known as “Les Savoyards” as all members of the secretive group came from the French Alpine region of Savoie.

The employees are also known as the “Cols Rouges” after the red trim on the collars of their black uniforms, paired with pristine white gloves.

The porters had monopolised the transport and handling of valuables for Drouot, one of the world's oldest auction houses, since 1860.

Much of the pilfering occurred while the porters set about emptying the homes of wealthy people after their deaths, taking items that were not inventoried.

Two pieces by leading Art Deco designer Eileen Gray went missing in July 2006, appearing three months later on the Drouot auction block where they sold for a combined total of one million euros.

The porters claimed they had no idea the objects — a pedestal table and a dressing table — could fetch such a fortune, with one saying they were to have been “hauled away by the rag-and-bone man”.