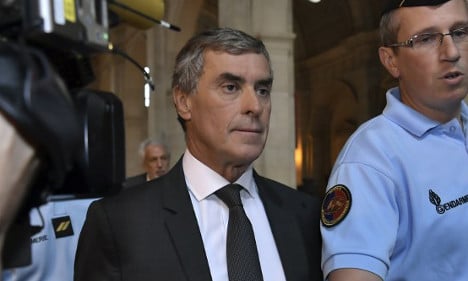 Photo: AFP
The 64-year-old former rising star in the French Socialist Party faces charges of tax evasion and money laundering as well as under-declaring the value of his fortune when he took up his post in 2012.
He and his ex-wife Patricia Menard — with whom he ran a lucrative hair transplant clinic — each face up to seven years in jail and one million euros ($1.1 million) in fines if convicted.
Also in the dock are their advisers, Swiss banker Francois Reyl and Dubai-based lawyer Philippe Houman.
The Reyl bank of Geneva, which in 2009 allegedly helped Cahuzac transfer funds to Singapore to avoid detection by French tax authorities, is also being tried.
The story of the fraud, carried out between 1992 and 2013, reads like a cross between a cheap airport novel and an international financial crime manual.
In one episode, Cahuzac, using the codename “Birdie”, allegedly received two cash payments of 10,000 euros each on the streets of Paris.
Cahuzac initially denied the allegations, lodging a defamation suit against the Mediapart news website that broke the story in December 2012.
Footage of the minister lying to parliament was repeated in an endless loop on French media after he confessed in April 2013 to holding a Swiss bank account.
He said he was “consumed by remorse”.
Cahuzac was immediately hounded by the media, telling a newspaper he had to move “every two days” to escape the glare.
The scandal was the first of a series that have tarnished the presidency of Francois Hollande, who had promised a squeaky-clean government after succeeding Nicolas Sarkozy, the subject of several graft investigations, in 2012.
The affair prompted Hollande to order his ministers to disclose their personal wealth, a first in France, where personal finances are rarely discussed and the wealth of public officials had long been considered a private matter.
Cahuzac's lawyers in February unsuccessfully challenged the constitutionality of the case, arguing that their client had already settled his debts with the tax authorities to the tune of 2.3 million euros and should not be tried twice over the same matter.
The trial runs until September 15th.
Url copied to clipboard!