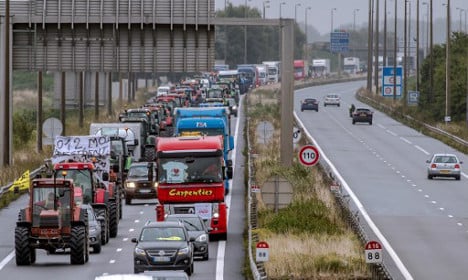 French farmers and truckers blocked the main routes in and out of the port of Calais on Monday to call for the
closure of the sprawling “Jungle” migrant camp.

Around 70 trucks mounted a “go-slow” on the A16 motorway — the main artery for freight and passengers heading for Britain either via the Channel Tunnel or on board ferries from the port.

Under a light drizzle, the trucks were joined by a line of farmers on their tractors, bringing to a near-standstill the route used by trucks from all over Europe to reach Calais. Despite the large tailbacks, many motorists passing the other way sounded their horns in support.

“We've had no answers, so we're blocking things up,” said Frederic Van Gansbeke, who represents businesses and shop-owners in Calais.

The Jungle, a squalid camp of makeshift tents and shelters, is home to some 7,000 migrants but charities say the number might be as high as 10,000 after an influx this summer.

Migrants from the camp often use tree branches to create road blocks to slow trucks heading for Britain, their destination of choice.

When the trucks slow down, migrants try to clamber into the trailers to stow away aboard.

Angry drivers say migrants have attacked their vehicles with metal bars and that the overstretched police are unable to protect them.

Nicolas Lotin, who runs a logistics company in nearby Boulogne-sur-Mer, said: “Every day, we have to wonder whether our working day will be ruined, whether a migrant will sneak under the truck's canvas.

“If the goods are damaged, they have to be immediately transported back to the home depot,” he said. “This demonstration is to shout loud and clear about how fed up road hauliers are,” said David Sagnard, head of the local branch of the National Federation of Road Hauliers.

“What we're calling for today are security measures so we can drive completely safely on the A16 motorway and on the port road,” he added.

Calais mayor Natacha Bouchart, who has frequently clashed with the government over the Jungle, joined the protest wearing an “I love Calais” T-shirt.

The mayor claims the camp may soon contain as many as 15,000 migrants if authorities take several months to dismantle it.

Organisers said they hoped that up to 500 people would join a “human chain” protest in the town's stadium later Monday.

'As soon as possible'

Interior Minister Bernard Cazeneuve promised during a visit to the Jungle on Friday to close the camp down “as quickly as possible” but said it would be done in stages.

Disgruntled Calais residents want the authorities to set a date for the entire camp to be cleared.

Bars and restaurants in Calais — which is also the main gateway to France for millions of British holidaymakers — say their trade has been severely hit by the presence of the Jungle.

Business owners want compensation from the state for lost income. France has made repeated efforts to close the Jungle.

Earlier this year, authorities cleared shelters in parts of the site in a bid to persuade migrants to move into more permanent accommodation or camps elsewhere on France's northern coast.

Former French president Nicolas Sarkozy, who is bidding to secure the right-wing nomination to win back the presidency next year, has called for Britain to take responsibility for the migrants over the Channel.

Last week France and Britain pledged to work together to increase security at the port of Calais and to improve the humanitarian situation for the Jungle's residents.

But the British government has dismissed as a “complete non-starter” a proposal by Xavier Bertrand, the president of the region that includes Calais, to allow migrants to lodge British asylum claims on French soil.

The population of the Jungle include large numbers of Sudanese, Afghan, Somali and Syrian residents.

SEE ALSO: Calais – A dying city but not quite Baghdad (Locals have protested against migrants in the past. AFP)