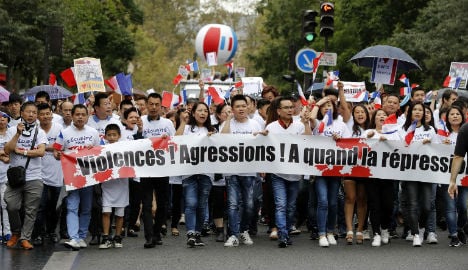 Large numbers of Chinese Parisians rallied at the Place de la Republique. Photo: Francois Guillot/AFP
The protesters, almost all wearing white T-shirts reading “Security for All” and many waving French flags, rallied at the Place de la Republique in central Paris.
Zhang Chaolin, who was 49, was set upon on August 7 by three thieves who tried to snatch a bag belonging to a friend of his. He died a few days later from his injuries.
Zhang's image appeared on a giant banner in the middle of the square, under the words, splattered with red paint: “Zhang Chaolin, dead for nothing. Who will be next?”
“Stop violence, aggression, insecurity”, one placard read amid the sea of white T-shirts worn by protestors who later marched towards nearby Place de la Nation.
An umbrella organisation, Stop the Violence, Security for All, called the protest two weeks after around 1,000 people marched in the Aubervilliers suburb north of Paris where the tailor was killed.
Elected officials who joined Saturday's protest included the right-wing president of the greater Paris region, Valerie Pecresse.C
Security for All is demanding police reinforcements, more security cameras and a recognition of anti-Asian racism.
On Sunday, Interior Minister Bernard Cazeneuve pledged to beef up the police presence in Aubervilliers and help finance security cameras.  Reported violent robberies targeting the Chinese community, who are seen as lucrative prey as they are thought to habitually carry large sums of cash, have tripled in the past year, from 35 to 105.
In the event, the bag the thieves were after during Zhang's mugging contained only candy, cigarettes and sunglasses, according to a source close to the investigation.
The stereotype has prompted a string of attacks on Chinese tourists, including one early last month in which assailants sprayed teargas on members of a tour group before making off with their luggage.
In September last year, a Chinese tourist guide was robbed of 25,000 euros ($28,300) in cash and his new Rolex watch after he had prevented two of his group from being robbed themselves outside a hotel in a Paris suburb.
A lawyer for the community, Francois Ormillien, has warned that without an adequate response from city authorities the community could form “defence leagues” — vigilante groups — to defend itself.
“There are youths 17 to 19 years old who are more aggressive than their elders and want to let loose, but they are very much in the minority,” Ormillien said.
He noted that authorities have begun cracking down harder on crime targeting the community, citing the example of a teenager with no prior police record who was jailed for two years for a violent theft.
Aubervilliers, home to generations of Chinese immigrants, is the hub of Europe's textile industry, where traders recently opened the continent's biggest garment centre.
Stop the Violence staged demonstrations in 2010 and 2011 in the eastern Belleville section of Paris, home to another sizeable Chinese community, after an attack on a wedding banquet there. 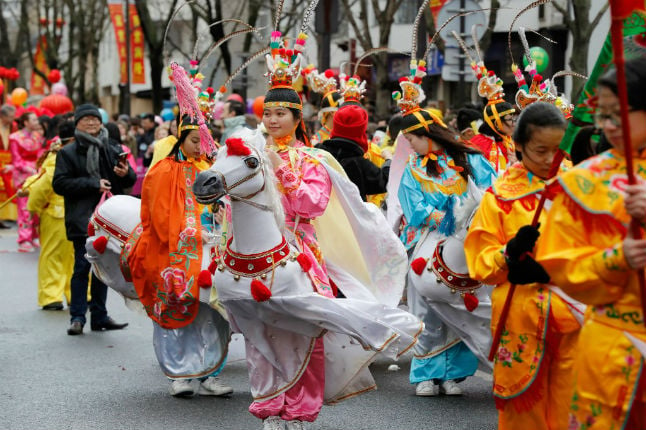 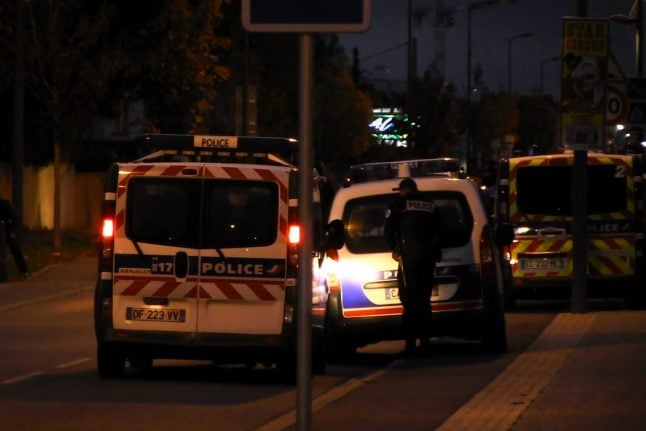