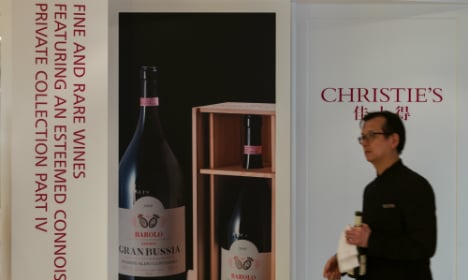 The auction house described it as the oldest bottle in the Bouchard cellars, with a pale golden colour and a honeyed character.

Tim Triptree, senior specialist and head of sales for Christie's wine department said he was “delighted” with the results from the Bouchard sale.

“Early examples of Burgundy like those presented in the sale are extremely rare, with 16 bottles in our sale dating from the 19th century,” Triptree said following the auction.

“The strong results from today's sale, reflect how Burgundy wines continue to be avidly collected in the (Asian) region,” he said, adding that the bottles were recorked after they were opened, tasted and checked.

Hong Kong, which abolished duties on wine imports in 2008, has been a gateway to the booming wine market in mainland China, but an austerity drive in China has made officials wary of bagging high-end bottles.

The crackdown on excess depressed sales in 2013 and 2014, but the Chinese market has since picked up.

Gilles de Larouziere, president of the Henriot wine group, which owns Maison Bouchard, had previously said the sale was taking place in the southern Chinese city because of “extraordinary enthusiasm for great French wines”.

The vineyards of Maison Bouchard Pere et Fils, which the Henriot family of Champagne took over in 1995, cover around 130 hectares (320 acres), of which 12 hectares produce grand cru wines and 74 hectares grow second-ranking premier crus.