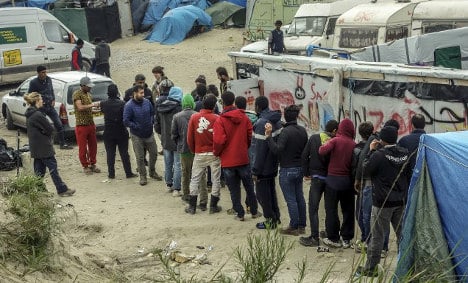 Charities working with migrants in Calais gave a lukewarm reception to the announcement that France intends to bulldoze the sprawling Calais Jungle migrant camp “in stages”.

Bernard Cazeneuve told regional paper Nord-Littoral he would press ahead with the closure “with the greatest determination” and that the site would be dismantled “in stages”.

Accommodation for thousands of migrants will be created elsewhere in France in an attempt “to unblock Calais”, Cazeneuve said.

But charities have heard promises likes this before, but the situation in the jungle, now home to up to 10,000 migrants, has never improved.

The squalid conditions have only worsened and now charities report that they are running out of supplies to feed everyone.

Anne-Lise Coury, head of operations for Medecins sans Frontieres in Calais, said the French government has shown no sign up to now that it is ready and willing to provide enough alternative accommodation to meet the needs.

“Of course the Jungle cannot be maintained like it is,” she told The Local. “But up until now the government’s figures for providing alternative lodging have been incoherent. The number of places they have provided around the country are far below the reality of what is needed.”

Since last October, more than 5,500 asylum seekers have left Calais for 161 special accommodation centres set up around France. But many migrants head back north after growing unhappy and frustrated.

The aid worker says in principle the idea of spreading out the migrants in asylum centres around the country is the right one, but the lack of resources or support means they often end up back in Calais.

“They find themselves in a department of France where there are no real translators. They can end up far from a town and the administrative offices they need,” said Coury.

“They may be also far from places where they can learn French or members of their community,” she added. “And they end up just deciding to go back to Calais.”

Franck Esnee, head of the Medecins Sans Frontieres added: “”The government needs to encourage initiatives by local mayors who are proposing to take in migrants in their towns.”

The government should also encourage the requisitioning of public buildings to house migrants, he said.

France has made repeated efforts to find a solution to the sea of tents and temporary shelters and earlier this year closed the southern part of the camp. But that has failed to stop the growth of the Jungle, with around 100 new migrants arriving each day in the port town.

Many migrants gather in Calais hoping to smuggle themselves aboard lorries crossing the Channel to Britain either through the Channel Tunnel or on ferries, but many others have decided to seek asylum in France, but have nowhere else to go so are forced to remain in the Jungle.

Calais mayor Natacha Bouchart claimed the camp could soon contain as many as 15,000 migrants if authorities took several months to dismantle it.

She wants it pulled down not in stages as is planned, but as swiftly as possible.

“We want to call for this dismantling but not in the way that it has been announced,” said Bouchart, who has often clashed with the government over the “Jungle”.

Calais residents will stage a protest on Monday over the effect the presence of thousands of migrants has had on their livelihoods.

Isabelle Bruand from Medecins du Monde another charity working in Calais said part of the solution lay with the British government opening its doors to more refugees.

“The British government has not done enough. It could accept to take in more children and certain “Anglophone” refugees, who speak the language etc, who are determined to follow a project in the UK.

“Up until the British government has just chosen to throw money at the problem and pay for new security fences, but it’s not enough.”