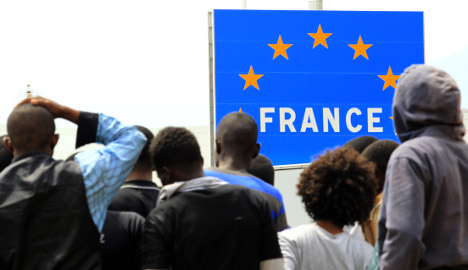 The number of illegal immigrants deported from France in the first half of 2016 has dropped by 20 percent according to a report in Le Figaro newspaper.

A confidential document from the Direction Générale des Étrangers en France revealed that since January this year some 8,660 migrants who were in France illegally were deported, compared to 10,800 during the same period in 2015.

But the drop in deportations, which include returning migrants to their country of origin or to other Schengen countries, is surprising given that the massive increase in migratory pressure on France’s borders, especially its frontier with Italy.

The number barred from entering France has risen by 287 percent and police have blocked entry to some 23,900 individuals who wanted to enter France, compared to 6,189 during the same period last year.

France has also seen an 18.3 percent increase in asylum applications. Some 40,072 have already been recorded, compared to 33,868 at this stage last year. According to Le Figaro, requests by Afghans seeking asylum has rocketed by 964 percent.

The reason given for the huge drop in deportations despite the rise in migration was that French police have had to switch their priorities due to heightened terror threat.

“Since the beginning of the state of the emergency the borders are subject to increased vigilance that requires a considerable number of staff, particularly members of the French Border Police (PAF),” said Olivier Hourcau from the Alliance police union.

Hourcau said administrative staff who usually carry out the deportation procedures have been forced to bolster the border, particularly at the flashpoint of Menton in the Alpes-Maritimes department on the border with Italy.

In the first half of  this year France gave refugee status to 12,094 individuals, up from 38 percent on last year.