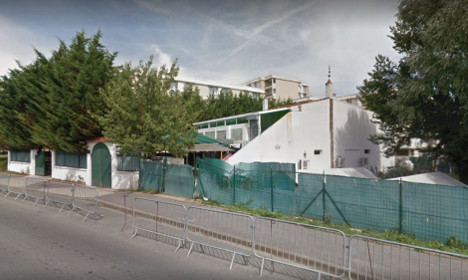 The Al-Islah mosque in Villiers-sur-Marne. Photo: GoogleMaps
The unregistered “school”, was discovered when police raised a mosque in Villiers-sur-Marne on Wednesday morning, reported Le Parisien newspaper.
The school, located on the first floor of the mosque, is understood to have held Koran classes for between 15 and 20 children each day, all between the ages of six and 12.
The children were “at risk of indoctrination”, the Interior Ministry said in a statement.
Local prosecutors added they were in danger of “being turned into jihadist recruits”.
Three men including the Imam were arrested, and authorities are looking into whether they are legally allowed to live in France.
The ministry said that the case was just part of the government's “determination to fight radical Islamism in by every means possible within the law”.

The illegal school, “L'école des Petites Abeilles” or “The Little Bees School”, is reported to have been set up around two years ago.

Saïd Merabet, a spokesperson for the Al-Islah mosque, said: “We rented the school a big room on the first floor, but we were under the impression that everything was in order; three or four teachers took turns to teach class.

“We’re low on funds. Renting out that classroom allowed us to pay the mosque’s electricity bill.”

However one local official described the existence of the mosque as somewhat of an open secret, that just needed verifying by the raid.

Wednesday's raid, which involved around 40 police officers according to France 3, was prompted by an investigation into the mosque itself.
Le Figaro newspaper reported that the Al-Islah mosque was attended by twelve people with convictions for their jihadist ties to Syria.
Merabet said: “People speak a lot of nonsense about our mosque, which is demoralising. We’re not radical Islamists. Every Friday, our imam preaches about the need to fight extremism.”
A spokesperson for the local town hall said that the raid was carried out with the cooperation of the leaders of the mosque.