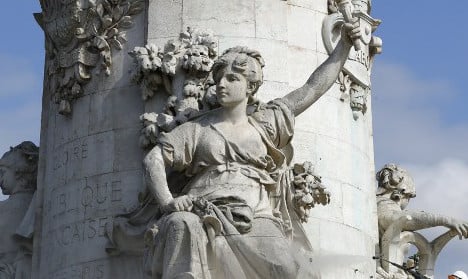 A statue of Marianne at the Place de la Republique in Paris, with her left breast on show. Photo: AFP

Manuel Valls insisted on Monday evening that bare breasts were a better representation of the values of France and of women’s rights than Muslim head coverings.

Just as the bitter row about France’s burqini bans was dying down Valls told an audience on Monday that the naked breast of Marianne, a national symbol of the French Republic, was an appropriate icon for the country.

“Marianne has a naked breast because she nourished the people! She was not veiled, because she is free! That is the Republic! That is Marianne!’ said the Prime Minister at a government meeting in Colomiers (Haut-Garonne).

The PM’s statement about Marianne, a symbol still widely seen in France whether on stamps or in statue form, was fiercely criticized by a number of feminists and historians, including Mathilde Larrère, who specializes in the history of the French revolution and citizenship at the University of Paris Est.

She tweeted in response to Valls’ comments, “Marianne has a naked breast because it’s an allegory, you cretin!”, adding that it was created at a time when women were considered minors and denied the right to vote.

French historian Nicolas Lebourg pointed out in the newspaper Liberation, that Valls might have been confusing Marianne with the earlier Delacroix painting, ‘Liberty leading the people’, dating back to 1830.

Some politicians noted that whilst Marianne’s breast was exposed, her head was in fact covered.

Manuel Valls has been an outspoken critic of the Muslim headscarf and he fell out with members of his own government after he showed support for those French mayors who imposed a ban on the burqini in over 30 towns in France.

The PM warned that despite France’s highest court ruling burqini bans illegal, the debate about was “not over”.

“We have to wage a determined fight against radical Islam, against these religious symbols which are filtering into public spaces,” Valls said in an interview on BFM-TV.

Reiterating his stance on the issue, he said: “For me the burqini is a symbol of the enslavement of women.”

On Tuesday the UN said the bans were degrading and humiliating”.