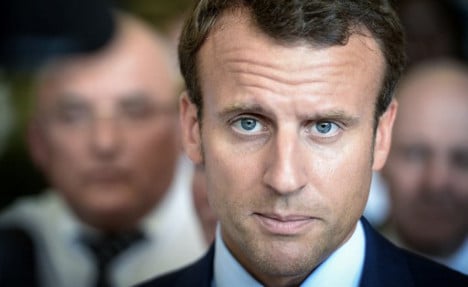 All photos: AFP
In just two years in the Socialist government, Macron confronted leftist ideals head-on, questioning the 35-hour work week and blaming high unemployment and weak growth on “a lack of competitiveness (and) a loss of French economic muscle”.
The 38-year-old's maverick attitude has often angered his leftist colleagues, but the brickbats aimed at him by rivals have failed to derail his ambitions.
“If approval was a criterion in this country, nothing would ever get done,” Macron said last year.
His willingness to challenge orthodoxies also extends to his personal life: at age 17, he ran off with a teacher at his high-school — a woman 20 years his senior, to whom he is married.
Quitting the government will allow him to prepare a run for president next year, possibly challenging President Francois Hollande, who plucked him from obscurity in 2014 to join his government.
Macron's first big test in office was to convince the notoriously change-averse French to accept reforms to kickstart their economy, with business-friendly laws such as allowing shops to open more often on Sundays. The move sparked angry protests.
Prime Minister Manuel Valls ultimately had to force the so-called “Macron Law” through parliament without a vote to avoid leftist rebels sinking it.
Macron's flair — and the fact that he is a fresh face in France's little-changing political scene — has seen him win over many young, cosmopolitan people.
It is these “winners from globalisation”, as Le Monde newspaper described them, who flock to rallies of Macron's political movement “En Marche” (On the Move) that he set up this year. How wide is appeal?
Yet, it is unclear how wide the appeal really is of a man who has never held elected office, and Macron has certainly rubbed many up the wrong way.
In June, angry union activists pelted him with eggs and yelled at him to “get lost” in reaction to a video in which he told a member of the powerful CGT union that “the best way to afford a suit is to work”.
He has also called for tougher labour reforms than the legislation passed this year despite violent street protests.
In January he irked workers when he said entrepreneurs often have “a harder life than employees (because) they can lose everything and have fewer guarantees”.
Macron's speeches to supporters have broadly hinted at his presidential ambitions.
He routinely polls higher than Hollande, who currently appears a weak choice as the potential Socialist candidate for the April-May 2017 election.
Hollande's response to Macron setting up his political movement in April was to say the economics minister “has to be in my team, under my authority”.
“It's a question of personal and political loyalty,” the president said.
Macron has regularly faced accusations from fellow cabinet ministers that he is “distracted” by pursuing his own interests ahead of France's.
“It's high time all this stopped,” an exasperated Valls fumed to TV cameras in July. Fell in love with teacher
Macron's marriage to a divorcee who had three children with her ex-husband has generated an unusual amount of coverage in the French media, which is usually cautious about delving into politicians' private lives.
Brigitte Trogneux, a teacher at his high school, told Paris Match magazine in April: “At the age of 17, Emmanuel said to me: 'Whatever you do, I will marry you!'”
Born in the northern French city of Amiens, Macron began his career with a masters in philosophy.
He then followed the well-trodden path to France's political class by graduating from the elite Ecole Nationale d'Administration (ENA). Macron also found time to learn German and become an award-winning pianist.
In his dizzying rise to the top, Macron would meet and become a close ally of Hollande.
In 2008, he was snapped up by the Rothschild banking group where he quickly climbed the ranks and became a millionaire.
Hollande kept Macron — a card-carrying Socialist since the age of 24 — by his side in his rise to the presidency, while publicly dubbing the world of finance his number-one enemy.
When he captured the Elysee in 2012, Hollande took Macron with him as a senior member of his staff, and made him economy minister two years later.