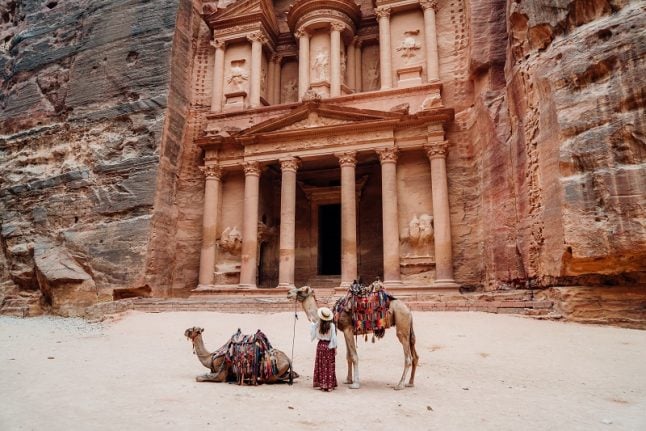 Geography, though, is in fact Jordan’s blessing… its location – nestled on the edge of the Arabian Peninsula and not far from the Mediterranean – has blessed it with an enviable collection of wonders – natural and manmade – that put the country in a class by itself.

If it weren’t for Jordan’s geography, it wouldn’t boast the awe-inspiring rock city of Petra; the spectacular canyons of Wadi Rum and Mujib; the ancient city of Jerash; or Mount Nebo, from where Moses saw The Promised Land; or the site of Jesus’ baptism at Bethany Beyond the Jordan. “Jordanians have a sense that they’ve been tasked to serve as guardians of something bigger than themselves,” says Khalid Itum.

Itum, a Jordanian national, travels frequently to Jordan from his current home in Los Angeles and once operated a travel company that arranged experiential travel to his native homeland.

He concurs that “Jordan really is different” than other countries in the region, due in part to its history and politics, but also because of its capacity to embrace and enmesh cultures that are often at odds with one another elsewhere.

“Jordan doesn’t have oil so chose to invest in human resources to thrive. That spawned a more liberal society against a backdrop of security. It’s more open and tolerant and is sort of close to everybody by necessity,” he explains.

“In Jordan there is no clash between east and west. They blend together nicely and naturally.”

Over the years, Itum has accompanied hundreds of visitors on their visits to Jordan, seeing first-hand how they react to the country when the also recognize just how different it is.

“You can see it in their eyes,” he explains. “The amazing religious sites, castles from the crusades, the amazing landscape – there’s something for everyone which is often more than people were expecting.” Another hallmark that sets Jordan apart is its openness, which is often expressed on a personal level the legendary hospitality of its people.

“I don’t think it’s possible for anyone to visit Jordan without being invited in to someone’s home to share a meal together,” says Itum.

When asked to offer up experiences that best exemplify Jordan as the Different East, Itum is quick to mention Petra – the one-of-a-kind UNESCO world heritage site featured in Raiders of the Lost Ark.

“I’ve probably been there a couple of dozen times and every time my jaw just drops at how spectacular it is. There really is nothing like it anywhere,” he says.

But he adds that there is far, far more and has always insisted that his guests spend a minimum of a week there and even encourages people to stay for 10+ days.

Itum also mentions his own home city of Jerash – host to one of Jordan’s largest cultural festivals, which features an eclectic mix of Jordanian and international artists, with performances taking place in the open air among the city’s famed Roman ruins. “Sitting there, listening to the music in that atmosphere, you feel like you’ve stepped into a different time,” he says. “But just beyond the spectacular Roman colonnades you find a modern, thriving city much like any other. It’s that sort of juxtaposition that really sums up what makes Jordan different.”

Another special spot for Itum and many of the tour groups he led is Mount Nebo, the spot described in the Old Testament where Moses was able to see the Promised Land.

“I’m not religious at all, but you can’t help but be gripped by the spirituality of the place,” he says. “And on a clear day you too can see the lights of Jerusalem.”

In some ways, Jordan’s distinctiveness comes from simply having been around for a long, long time. But more than that, it’s also how the country has preserved the legacy while at the same time embracing what lies ahead.

“Jordan really is one of the best places you'll ever travel to on the face of this earth,” Itum says. “I can try to paint the picture, but you'll have to experience it for yourself to truly understand.”

The sentiment was perhaps best expressed by the late King Hussein, who ruled Jordan for more than four decades until his death in 1999:

“Jordan has a strange, haunting beauty and a sense of timelessness. Dotted with the ruins of empires once great, it is the last resort of yesterday in the world of tomorrow.” This article was produced by The Local and sponsored by Jordan Tourism Board.