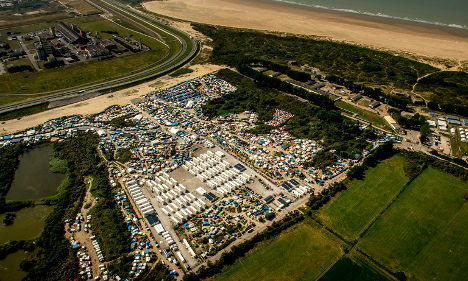 Photos: AFP
In June this year, aid groups estimated that there were around 4,500 migrants in the Jungle camp in Calais. Two weeks ago, Calais officials put the figure at 6,901 even though aid groups claimed their own census put the population at over 9,000.
Police are now saying that the actual population “should reach 10,000 by the start of September”, Le Figaro newspaper reported on Monday.
“Soon there'll be so many people in the 'Jungle' that each passing day makes a mass evacuation all the more risky,” Jean-Claude Delage of the police union Alliance told the paper.
And this is just in the Jungle. In the nearby Grande-Synthe camp, not far from Dunkirk, there are another 2,000 or so, taking the population of migrants in the northern reaches of France up to potentially 12,000.
Police were speaking out as the issue of France's border deal with the UK once again flares up.
At the weekend, presidential candidate Nicolas Sarkozy said the Touquet deal which allows British border checks to take place in France and vice versa should be scrapped.
It was Sarkozy himself who had signed the deal with the UK when he was interior minister in 2003 but he now believes it must be rewritten given the sheer number of migrants in Calais.
Xavier Bertrand, president of the Hauts-de-France region has also repeatedly called for France to force the UK border to be moved back across the Channel if London does not agree to allow migrants to apply for asylum in the UK from certain “hot spots” in France.
“It's not possible to keep people here without a new agreement between the two governments,” Bertrand told the BBC.
Currently under EU law the migrants in Calais can only apply for asylum in France, but many decline to do so.
The British government would fiercely resist any change to the Touquet deal which greatly benefits the UK.
Former UK ambassador to France Sir Peter Ricketts warned that if a right wing candidate wins next year's presidential election in France then Britain will “have to a have a pretty serious conversation with France about the Touquet agreement”.
Earlier this year French president François Hollande tried to allay British fears by insisting the treaty would not change. While the number of migrants in the camp causes immigration authorities to fret, it has also been raised as a security issue for France.
Senior police officers in Calais have also said that the migrant camp was a “blind spot” in France's security.
“It's truly mind boggling what's going on there,” said an officer of the CRS force, which is tasked with maintaining public order. “It's worse than ever.”
“It's impossible to know if, for example, a jihadist from Belgium is hiding in there. This camp is a blind spot for national security in the middle of the state of emergency.”
And the camp isn't always a peaceful one.
There have been numerous reports in the French press of some of these migrants getting involved in brawls in the camp, with one Sudanese migrant killed last week in clashes with Afghan migrants.
Denis Hurt of the police union Unsa estimated that around 20 migrants make it to the UK each night, with some of them turning to violence to get there.
“Some motorists have been attacked,” he told Le Figaro. Indeed, last week a group of migrants hoping to reach the UK ambushed a truck driver in Calais in an attempt to use the vehicle to cross the border.
But not all find the “El Dorado” in England that they expected, with Hurt adding that sometimes migrants actually return to Calais once again.

Work is set to begin next month on a giant wall, funded by Britain, which aims to block migrants from trying to jump aboard lorries heading for the port of Calais. However, aid organizations say it is a waste of money and “nothing will deter” the migrants from attempting to reach their desired destination.

Some have even used small boats to try to cross the Channel. Travelling in road vehicles is not without risks either; in December, a group of 19 migrants was found dead in a cement mixer truck at the Belgian border, having presumably hoped it would take them to the UK.