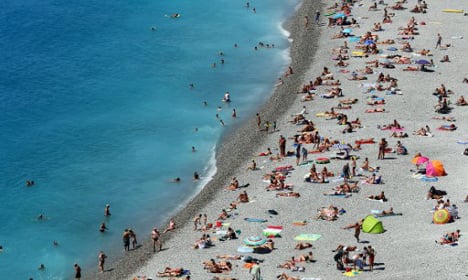 The beach in the Riviera city of Nice. Photo: Valery Hache/AFP

Across the country, just 30 of the €38 fines have been handed out to women wearing the full-body bathing suit – and all 30 of them were issued in just two towns.

In Cannes, six people have been fined, and the number rises to 24 in Nice, where the ban has only been in place for a week.

These figures were revealed by French newspaper BFMTV, which looked at 24 of the communes where the rule has been introduced this summer. The remaining six declined to comment. However, several towns which hadn't issued fines did confirm that municipal police had “intervened” on public beaches when women had been wearing burqinis, and that the majority of these interventions were carried out peacefully.

Others said the aim of the ban was prevention rather than actually giving out fines; in Sainte-Maxime on the Riviera, for example. the mayor admitted he hadn't seen anyone wearing the burqini.

In some areas though, notably Sisco in Corsica, the burqini ban was a response to clashes between locals and one violent incident in particular which at the time were said to have broken out after a tourist took pictures of burqini-wearing  women. The fact that very few fines have been handed out has not stopped fierce criticisms of the ban being raised in France and abroad, particularly after images surfaced appearing to show a woman forced to remove her tunic by police. One French businessman even began a fund to pay the €38 fine for wearers of the burqini.

The official accounts of “peaceful intervention” also contrast with the statement of one woman, named as Siam, who said she was the victim of abuse when police demanded she pay a fine for wearing a simple hijab.

On Friday afternoon, France's top administrative court will decide if the burqini ban is legal, setting a precedent for the other towns where it is in place.

The Human Rights League (LDH) is appealing a decision by a lower court in the Riviera city of Nice which upheld a ban on the outfit by the town of Villeneuve-Loubet.

READ NEXT: What do Parisians think of France's burqini bans