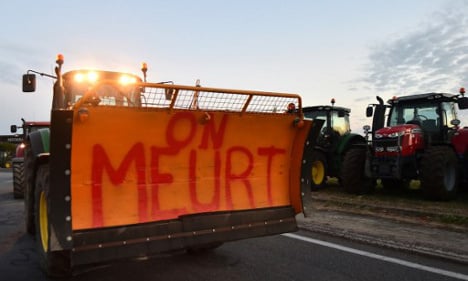 The price of milk has soured the atmosphere between producers and unions and talks in France on Thursday had failed to strike a deal on higher prices.

Producers said Friday it was up to Lactalis to come up with a new offer which the group did, raising prices by 15 euros ($17) per 1,000 litres (250 gallons) from September 1st. But the move did not impress the FNSEA agricultural workers' union, which vowed to continue its protest and demanded urgent talks with local authorities.

In a statement, Lactalis said “despite the irresponsible attitude of FNSEA, the Lactalis group is increasing, from September 1st, the price of milk.” The group added it recognized the “real difficulties experienced by milk producers”.

Lactalis spokesman Michel Valet told AFP that Lactalis made the proposal “to show we are still moving forward and negotiating.

“Yesterday we were speaking to people who did not want to negotiate,” said Valet, adding he hoped to find common ground.

The issue has also made waves in other countries, including Britain, with producers saying plunging prices in a dairy industry hit by over-production and a Russian embargo mean they cannot cover their costs. Last month, Brussels announced a 500 million euro ($553 million) package to help keep milk farmers afloat.

The abolition of European Union milk quotas in April 2015 helped trigger a collapse in prices that have not recovered despite an initial aid package agreed last September.

The French agriculture ministry meanwhile announced Friday it will next week unveil a plan to regulate production in line with the EU package, which includes compensation for farmers who produce less milk. France is to receive about €50 million of the EU money which the French state may double.