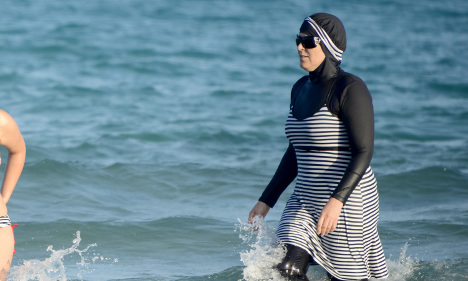 Photo: AFP
The burqini bans in around 30 towns in France have left spectators outraged, confused, angry, and disappointed.
But what about the people who are actually affected by the ban, that is, Muslim women in France?
Agnès De Féo, a sociologist and filmmaker who has explored the subject of the burqa for over a decade, has been carrying out interviews with Muslim women in France in recent weeks and has found that the bans have left the women split into two groups.
“Some of them have said that they feel even stronger in their faith, that they will never take off their veil,” she told The Local.
“They said they wouldn't even remove it if a police officer asked them to,” she said, referring to another woman who in photos from earlier this week appeared to be doing exactly that. But more worryingly, she said, other women said they have been left in fear.
“I've never heard this from Muslim women in France until this week, but many said they felt like how the Jews must have felt in France in the 1930's and '40's.
“They've said they feel like they could be victims of a mass murder, they say they don't feel good on the street… they say that people are looking at them in a bad way,” she said.
Some have said they want to leave France due to having no hope and no identity, even though they like the country, she said.
“These are women who speak French, they've integrated in France. They are French women. But they don't feel welcome in France. They feel targeted by not just the laws, but the people.
“I was surprised to find this reaction, because Muslim women in France weren't like this before, they were proud.
“But what happens when you're scared of the future? This is a country that takes pride in its human rights record and yet it is stigmatizing some of its own population.” De Feo said that the typical member of the French public likely doesn't even know why Muslim women choose to cover themselves.
“You have to understand that they're wearing these burqas, burqinis, and veils in a positive way. They're showing that they are pure and serious about their religion. They don't understand why French people would be against this, and even fining them for it, when they feel they're behaving well,” she said.
What France is left with, she said, are women who don't feel accepted by the French government and the French public because they're being associated with terrorists. But the same women are also pushed away by radical salafists who turn their noses up at burqinis too.
A 31-year-old Muslim woman in southern France said on Friday afternoon that the suspension of the burqini ban wasn't enough to reassure her for her safety in France.
“This is good news that they've suspended the ban, but it's just a question of time before they find something else to ban,” she told The Local.
“What scares me is how normal racism is now. Whatever they do against muslim people and especially against Muslim women has just become normal.”
“They are claiming they are making Muslim women free by banning us from school, from work, from public places, from swimming pools and from the beach – this is how they supposedly make us free. What kind of liberty is that?”