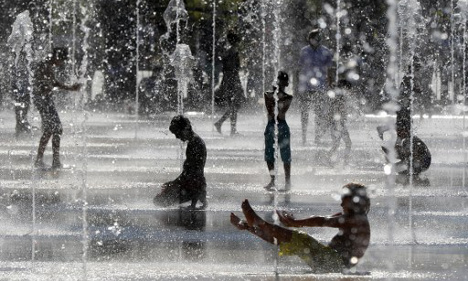 Weather agency Météo France has issued weather warnings for most of France, with the number of départements placed on orange alert rising to 43.

The alerts, sent out in a bulletin on Thursday afternoon, are in place until Saturday morning.

The départements where the alert was raised from yellow to orange were: Jura, Meurthe-et-Moselle, Moselle, Haute-Saône, Vosges and Territoire de Belfort.

An orange alert is the second highest level of alert in France and urges the public to be vigilant and to avoid unnecessary travel. People were also advised to spend at least three hours of the day in a “cool place”.
The départements receiving the warnings were mostly in central and north eastern France, with a few in the south west on alert as well (see map below). A further 30 were on yellow alert, the second highest level.
The agency said that temperatures had topped 35C in several areas on Thursday afternoon, including Paris and central France, after Wednesday saw temperatures above 30C across almost the entire country. People won't be feeling much relief into the evening, as temperatures will still be as high as 35C in some places, notably in the central and south western reaches of France. On Friday, temperatures in the east of the country were expected to rise to 35-37C, while seeing a slight drop in western areas.

The agency predicted a further rise in the east on Saturday, with Paris and central France likely to reach a maximum of 35-38C.

The agency said that even healthy people will be at risk if they're in the areas with orange alerts, and it urged people to watch out for signs of heat stroke, especially among the sick and elderly.

READ ALSO: How to keep cool during France's heatwave