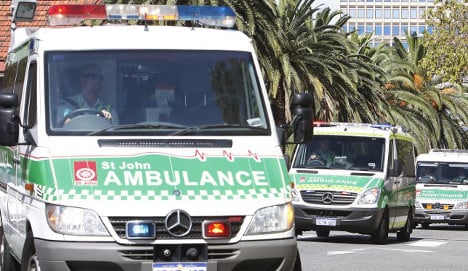 Photo: AFP
The incident took place late Tuesday at Home Hill, a rural town south of Townsville in far north Queensland, Deputy Commissioner Steve Gollschewski told reporters in Brisbane.
Gollschewski said officers were called to the hostel at about 11.15pm and found the 21-year-old woman dead and a 30-year-old man in a critical condition. A local man was also injured in the attack but has since been released from hospital, he added.
“Initial inquiries indicate that comments which may be construed of being of an extremist nature were made by the alleged offender,” he added.
“It is alleged that the suspect used the phrase ‘Allahu Akbar’ when arrested by police.
“While this information will be factored into the investigation we are not ruling out any motivations at this stage, whether they be political or criminal.”
When asked if the 29-year-old Frenchman, who is in police custody, had links to the so-called Islamic State group, Gollschewski said “no” and added that there was no ongoing threat to the community.
“At this stage there’s no indications… other than the fact he was acting alone,” Australian Federal Police Commander Sharon Cowden added at the same press conference.
“It is a shocking incident and the community should remain vigilant. He was lawfully in Australia and at this stage he is not known to any authorities.”
Canberra has been increasingly concerned about extremism in the country, and in particular about home-grown radicalisation, and raised the terror threat alert level to high in September 2014.
Authorities have conducted a series of counter-terrorism raids in various cities, while the government has passed new national security laws.
Url copied to clipboard!