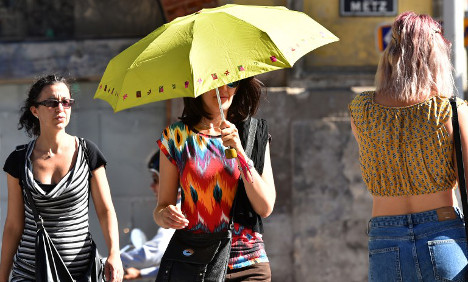 Weather agency Météo France has extended its weather warnings for most of France, with 37 départements placed on orange alert – up from 14 in the morning.

In a bulletin on Wednesday afternoon, the agency extended these alerts until Friday morning.

An orange alert is the second highest level of alert in France and urges the public to be vigilant and to avoid unnecessary travel.
The départements to get the warnings were mostly in central France, but stretched the the far northern reaches of the country, with a few in the south west on alert as well (see map below). The agency said that on Wednesday afternoon, temperatures had reached the high thirties in some parts of central France, and 35C in Paris.

By the late afternoon and into the early evening (see map below), temperatures will only have cooled off slightly. And if you're hoping for a cool night then you can forget it, with the mercury set to hover above 20C throughout the evening for much of France (see map below). The agency said that even healthy people will be at risk if they're in the areas with orange alerts, and it urged people to watch out for signs of heat stroke, especially among the sick and elderly.

READ ALSO: How to keep cool during France's heatwave