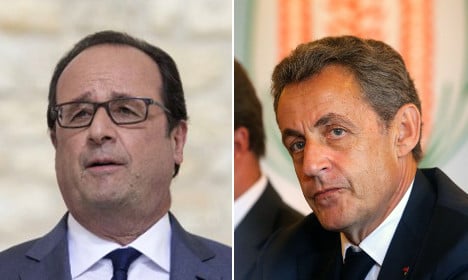 President Hollande, who hasn't yet announced if he will run, and Nicolas Sarkozy, who is eyeing up the top job next year. Photo: AFP
Despite a public yearning for political renewal, the 2017 vote for France's top job is shaping up as a contest between faces that, to many, are drearily familiar.
Sarkozy fired the gun on Monday for what may be a deja-vu denouement in the two-round race in April and May.
He confirmed he would seek to win back the presidency he lost in 2012 to his despised Socialist rival, Francois Hollande.
To run again is unprecedented in modern French history. Instead of returning to the fray, former heads of state normally leave the political arena and are enshrined as statesmen.
“Never has a former president stood again for the top office,” said Frederic Dabi of Ifop polling company, referring to the period since the founding of the Fifth Republic in 1958.
But, true to his iron-clad self-belief, Sarkozy appears undaunted by this slap at tradition.
Nor does he seem perturbed by his low popularity among the general public — or by two ongoing probes into influence-peddling and campaign spending that could badly damage his chances.
Sarkozy used publication of a new book to unveil his long-expected announcement.
He said he felt he had the “strength” to lead France again, unveiling a series of hardline proposals on security and national identity.
His promise to “drastically reduce” immigration and extend laws curtailing religious symbols in public was seen as an attempt to capitalise on voter concerns about Muslim integration following a string of jihadist attacks.
Eye on rightwing vote
By styling himself a man of authority Sarkozy, 61, hopes to draw voters away from two other leaders on the right, both of them veteran warhorses of French politics.
One is Marine Le Pen, 48, head of the far-right National Front (FN), and the other is the more moderate Bordeaux mayor, 71-year-old former premier Alain Juppe.
Long the favourite among mainstream conservatives to champion the Republicans party, Juppe has seen his poll lead shrink in recent weeks, while Sarkozy's star has risen.
The Socialist Party has been adrift for months over the 2017 elections, but Sarkozy's re-emergence seems to have given it a jolt of energy.
To many on the left, Sarkozy is a bogey figure, reviled for his “bling-bling” lifestyle and hawkish policies.
Prime Minister Manuel Valls said Sarkozy's proposals showed a “hardline and populist” drift in the conservative camp and said he was “convinced” the left could win the day.
While admired by many within his party for his tenacity and tough rhetoric, a poll published Tuesday by BFM TV showed 79 percent of the French opposing another Sarkozy presidency.
Socialist turmoil
Analysts said the Socialists clearly hope the spectre of a Sarkozy comeback will unite the party, mobilising grassroots members alienated by Hollande's pro-business U-turn on the economy.
But who will be their challenger?
Hollande, 62, has surpassed Sarkozy in the unpopularity stakes to become the least-loved leader in post-war France: four people out of five say they oppose his seeking re-election.
Like Sarkozy, Hollande has delayed any announcement of whether he will run again.
He has expressed a “desire” to put his name forward but also says he will announce his decision by the end of the year.
Two of his former ministers have already announced their own presidential bids, including former economy minister Arnaud Montebourg, on the left of the party.
Forecasts currently show Hollande would not make it past the first round in April if he does run.
That would pave the way for a repeat of the 2002 upset when then FN leader Jean-Marie Le Pen — Marine Le Pen's father — beat the Socialist candidate Lionel Jospin to challenge the conservative Jacques Chirac in the run-off.
Le Pen lost massively partly because leftwing voters rallied to Chirac, the “republican choice.”
Same faces
For historian and politics lecturer Jean Garrigues, the fact that both Sarkozy and Hollande are again likely contenders, despite their unpopularity, shows the “oligarchic, even monarchical” nature of French politics.
“There's a deep contrast between the lack of turnover at the top and the need for renewal which is being expressed everywhere,” he said.
Garrigues cited the Occupy-style “Nuit Debout” protest movement in Paris earlier this year and the appeal among young people of upstart banker-turned-economy minister Emmanuel Macron.
What favours Hollande and Sarkozy, he argued, is a fear of the untested, following the string of terror attacks that have claimed over 230 lives since January 2015.
“On the left, the reflex of national unity is good for Francois Hollande and on the right, Nicolas Sarkozy stands out in the role of combative leader,” said Garrigues.