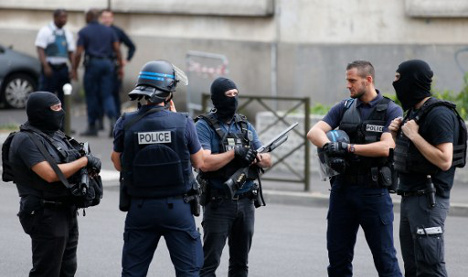 Police officers during an anti-terrorism operation last month. Photo: AFP
Cazeneuve said at a press conference that French police had arrested as many people for terror links in the first half of 2016 as for the whole of last year.
However, he did not give details of the August arrests.
On August 8th, a 16-year-old girl from the Paris suburb of Melun was remanded in custody on charges of planning a jihadist attack.
The teenager was an administrator of a group on Telegram, an encrypted messaging app that was used by two jihadists to plan the murder of a priest in Normandy in July.
According to investigators, she “relayed numerous Islamic State group propaganda messages calling for attacks” and also expressed a personal desire to “take action”.
The arrests follow two attacks in July that shocked the country just as it was starting to rebound from the jihadist bloodshed in Paris in November.
On July 14, a 31-year-old Tunisian rammed a 19-tonne truck into crowds of people celebrating Bastille Day in the Riviera city of Nice, killing 86 people and wounding more than 400.
And on July 26, two 19-year-olds stormed a church in the northern town of Saint-Etienne-du-Rouvray and slit the throat of an elderly priest.
Several major cultural and sporting events were cancelled in the wake of the attacks on security grounds.