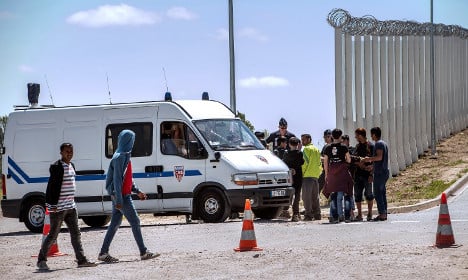 Photo: AFP
The two migrants were among a group of people from the “Jungle” camp who tried to access a motorway to smuggle onto trucks crossing the Channel to Britain on Monday night, local police said.
In scenes that play out nightly, police pushed back the would-be stowaways.
A fight later broke out between groups of Afghans and Sudanese returning to the sprawling “Jungle”, which is home to nearly 7,000 migrants from across Africa, the Middle East and Central Asia.
One Sudanese man died in hospital from stab wounds sustained in the clashes, the police said.
Another man was being treated for head injuries but was not in critical condition.
An investigation into the incident was underway.
The Sudanese man's death brings to 11 the number of migrants who have died this year in and around Calais, the main staging point in France for undocumented migrants and asylum-seekers trying to reach Britain.
A police source noted growing tensions in the area, where the number of attempts by migrants to halt trucks and jump aboard had grown from “five a night to around 15, 20” in recent weeks.
Last week, Calais authorities announced that the number of people living in the “Jungle” had shot up to 6,901 — 2,415 more than in June.