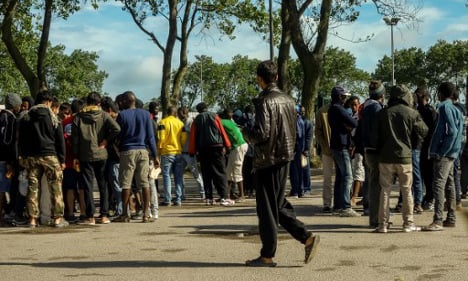 Migrants at an aid centre outside the Calais 'Jungle' camp. Photo: AFP

Six out of ten people in France believe immigration has had a “negative impact”, said the Ipsos polling institute. This figure was similar in Belgium which, like France, has seen terrorist attacks in recent months.

Just 11 percent of French people felt that immigration had an overall positive impact; the average figure over the 22 countries surveyed was 20 percent, ranging from six percent in Turkey to 36 percent in Canada.

More than half of French people (54 percent) said immigration was “causing their country to change in ways they don't like,” a figure which again was higher than the global average of 46 percent.

Yves Bardon, an Ipsos director in France, said that the media bombardment of images of migrants and refugees arriving on Europe's shores “have heightened the fear of uncontrollable migration throughout most of Europe, with the key issue being their ability to integrate”.

Indeed, 63 percent of those surveyed in France said most refugees “won't be able to integrate” which 60 percent were concerned about the effect of immigration on public services.

Bardon also explained: “In countries affected by high unemployment, like France, Spain and Italy, we can hypothesize that the respondents feel threatened by immigrants who are capable of taking jobs which don't require qualifications.”

“This study shows the fears and trends which we can anticipate in the coming debates and campaigns for the 2017 presidential elections,” Bardon said.

The survey showed that across the world, most people are becoming increasingly uncomfortable with immigration levels which are higher than any time since the Second World War. In addition to France, countries which were particularly concerned by immigration figures were Italy, where 67 percent felt there were 'too many immigrants”, Turkey (85 percent), and Spain (40 percent). On average, 49 percent of those surveyed worldwide agreed with this statement.

As well as fears about the consequences of mass immigration, the survey also revealed doubts as to the authenticity of those seeking asylum. More than half of French respondents – 54 percent – said that many of those claiming to be refugees were not really.

Sixty-seven percent of French people were concerned about terrorists pretending to be refugees, while 45 percent called for their nation's borders to be closed entirely. These figures were slightly above the global averages, at 60 percent and 40 percent respectively.

The surveyors also pointed to a rise in the number of British people who think that immigration has been good for the country, standing at 35 percent, sharply up on the 19 percent recorded in 2011. And while almost half of the British surveyed felt there were too many immigrants in the country, this level was down from 71 percent five years ago.

“Britain has in fact become more positive about many aspects of immigration. This might seem surprising given that the desire to reduce immigration was undoubtedly a key reason for the Brexit vote,” Ipsos spokesman Bobby Duffy said.

Duffy added however that the referendum decision to leave the EU “has polarized opinion” in Britain.