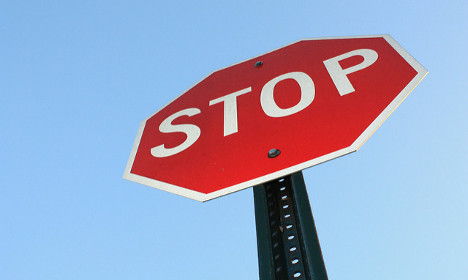 Photo: thecrazyfilmgirl/Flickr
The town of Nay, in the Pyrénées-Atlantiques département of southern France, has been hit by a most unusual form of vandalism.
Unknown assailants have targeted scores of the town's road signs, and the local authorities have come to a dead end in their bids to find out why.

“At roundabouts and on roadsides, we've found 180 directional signs that have been blacked out and are illegible,” a town official told the Europe 1 channel.
Pictures on social media show that the directions, town names and their distances have all been covered in what appears to be black paint.
The official estimated the damage to be “in the hundreds of thousands of euros”, with one repair estimate on Tuesday coming to a whopping €1 million, reported the 20 Minutes newspaper.
And quite unsurprisingly, town officials hope the vandalism will come to a Stop before it takes another turn for the worse.

The town said that the graffiti was an act of “total irresponsibility” and would hit the economy of the Ossau Valley hard, not to mention the fact that it increased the risks of driving on the road.
And it's going to be the taxpayers who foot the bill, news that surely won't be received gladly by the town's 3,000-strong population.
Town officials have reported the matter to police and are calling for witnesses to get in touch at full speed.