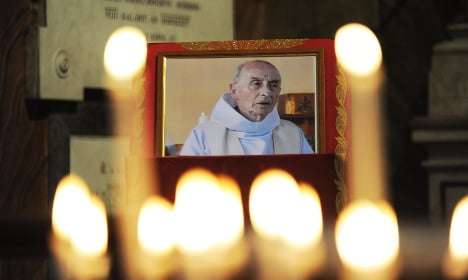 A picture of the murdered priest, Jacques Hamel. Photo: AFP

Adel Kermiche, 19, was shot dead by French police after he and another assailant attacked a church on 26 July in Saint-Etienne-du-Rouvroy in northern France, murdering priest Jacques Hamel and seriously injuring another hostage.

On Friday evening, Kermiche was buried in a discreet funeral in the Muslim section of a multi-faith cemetery in the Puiseux-Pontoise suburb northwest of Paris.

“All we did was strictly apply the law. The family owns a crypt in the cemetery, and the… law guarantees the right to be buried, regardless of the circumstances surrounding the person’s death,” a local official said.

France has wrestled with the conundrum of where to bury the jihadists behind a string of deadly attacks in recent months.

After standing in solidarity with Christians mourning the bloodshed at the Normandy church, local Muslim leaders in France refused to grant Kermiche a Muslim burial.

Officials meanwhile fear that graves of jihadists could become a site of “pilgrimage” for other extremists.

Abdel Malik Petitjean, the other assailant in the church attack, has not yet been buried, with the mayors of the two areas where he was born and where he lived still refusing to allow his body to be inhumed on their turf.