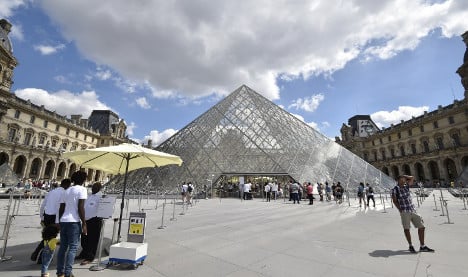 The entrance to the Louvre in Paris, usually full of tourists. Photo: AFP
Foreign visitors were the biggest absentees, with numbers down nearly 8.5 percent from April to June compared with the same period last year.
Overall bookings for the period were down 4.8 percent.
Bookings by foreign and domestic tourists had actually shown a slight one percent increase in the first quarter of the year, but the effect of the November attacks that killed 130 people in Paris was felt sharply in the second quarter and was exacerbated by a number of domestic factors.
Visitors from within France were also down because of a quirk in the 2016 calendar as two national holidays in May fell on a Sunday, the Insee national statistics institute said, adding that poor weather was another factor.
The sharp fall “is comparable to the decrease in the final three months of 2015, immediately after the November attacks”, Insee said.
Only the effect of the Euro 2016 football championships hosted by France in June and early July prevented a bigger fall in hotel bookings.
“The decrease in June is more moderate thanks mainly to the positive impact of the Euro football in the cities that hosted matches,” Insee said.
France's tourist industry took another blow in July after 85 people were killed when a man pledging allegiance to the Islamic State group rammed a lorry into a crowd celebrating Bastille Day in the Riviera city of Nice.
21 photos to make you want to come to France right now