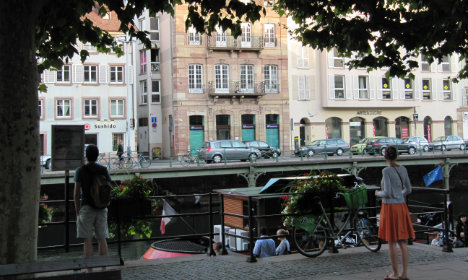 The victim, a 62-year-old retiree who was wearing a kippa skullcap, was stabbed in the abdomen in the city's Jewish quarter by a man with a record of anti-Semitic violence, Strasbourg's chief rabbi, Rene Gutman, told AFP.

The victim was admitted to hospital but Gutman said his injuries were not life-threatening.

Several witnesses said the attacker shouted “Allahu Akbar” (God is greatest) as he set upon his victim with a knife.

The local prosecutor's office confirmed the alleged attacker's arrest and said an investigation had been launched.

According to BFMTV, citing sources close to the enquiry, an anti-semitic motive was not initially established and terrorism was ruled out.

Police have not commented on the motive for the assault, but said the suspect, a man in his forties, had a history of mental health problems.

In 2010, he attacked another kippa-wearing Jewish man in Strasbourg, beating him with an iron bar in a public square.

Put on trial for attempted murder, he was considered to be not mentally responsible for his acts under criminal law and detained in a psychiatric hospital.

Prosecutors at the time said the aggressor believed himself to be “the victim of a Jewish conspiracy” which he blamed for “all his misfortunes”.

Condemning the latest attack, the chief rabbi said it “in no way reflects the prevailing climate in Strasbourg,” which is home to around 15,000 Jews. But he also called for action to prevent the attacker reoffending.

“If this person can go back onto the street, and stabs any man in a kippa he meets, that's a problem,” he said.

The attack happened as the victim left his home to do some shopping. Witnesses to the attack seized the assailant, “who did not put up any resistance”, the prosecutor's office said.

Mendel Samana, another rabbi who came on the scene shortly after the stabbing, said the victim was “very shocked and feels he had a lucky escape”.

Samana said the victim, a father of three, had told him he had managed to escape after receiving a single stab wound and sought help in a nearby bar.

Interior Minister Bernard Cazeneuve phoned Gutman after the attack to express his solidarity with the Jewish community, the rabbi said.

France has the largest Jewish and Muslim populations in western Europe. Its Jewish community is estimated at 500,000 to 600,000 people, and there are around five million Muslims.

The attack comes as the country reels from a string of jihadist attacks in the past year-and-a-half, beginning with the January 2015 killings in Paris at the satirical newspaper Charlie Hebdo and a Jewish supermarket.

On January this year, a 15-year-old supporter of the Islamic State group attacked a Jewish teacher in Marseille with a machete.