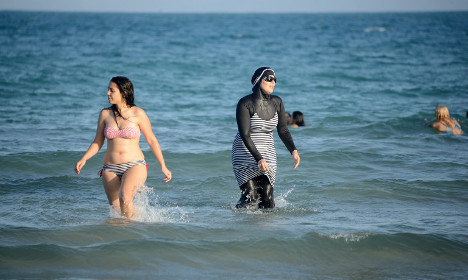 Photo: AFP
Officials from France's most popular beach town have announced a ban on the burqini that will run until September 15th.
The town joins ten others in the Alpes-Maritimes département including Menton, Villeneuve-Loubet, Saint-Laurent-du-Var, Beaulieu-sur-Mer, Saint-Jean-Cap-Ferrat, and most notably Cannes, which has already dished out several €38 fines to women caught wearing the swimsuit.
Christian Estrosi, president of the regional council that includes Nice, announced the ban in a letter to the prime minister on Friday.
“Wearing an all-covering outfit does not match our ideal of a social relationship,” he said.
Prime Minister Manuel Valls already weighed in on the debate earlier this week, lashing the wearing of the burqini as “not compatible with the values of France and the Republic”.
He said that he supported mayors who ban it if they acted in the public good.
He told La Provence newspaper that the burqini, which covers the body and hair, is a “provocation” that risks causing “public disorder”.
Valls however ruled out implementing any nationwide ban.
But the topic has divided France and even drawn ridicule from around the world.
French sociologist and Islam expert Raphael Liogier told The Local on Tuesday that the debate had left him in shock.
“I'm really shocked, but not because women are wearing burqinis. I'm shocked because people feel they have to react to it. Women have the freedom to wear a burqini if they want to,” he said.
“Put it like this: If a woman wears a very short skirt and then gets raped, no one would ever try to ban short skirts. They would punish the rapists. That's how a free country with civilized people works. But we are doing the opposite here.”
READ ALSO: How the world is reacting to France's burqini bans