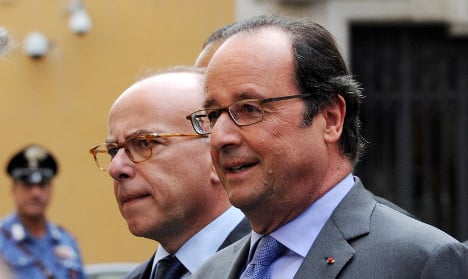 Photo: AFP
Quoted by journalists Antonin Andre and Karim Rissouli in “Conversations Privees avec le President” (Private Conversations with the President), Hollande highlighted the strain of politics, the burden of high office and the passing of time.
“I know what it's like… to spend years without a personal life,” he said.
“But I do have the desire” to stand for re-election, he said. “That is my personal inclination.”
He added, though: “I would not make the choice of putting my name forward if the signs are that it could not lead to a possibility of victory.”
“If I lost, I would quit politics.”
The president celebrated his 62nd birthday on August 12.
“When you get beyond 60, the years have a different value. I also know what the weight of the (presidential) task is. It's true, it could also be a kind of freedom not to do it…” Hollande said, apparently musing out loud.
Separately, in remarks that the journalists dated to November 2013, Hollande said of the presidency, “It's tough, of course it's tough. Much tougher than I had imagined.”
Hollande is struggling with a historic low in popularity, driven by France's high unemployment rate but also coinciding with terror attacks that have shaken the country.
Hollande argued that his response to the jihadist assaults had reassured many members of the public about his leadership, according to the book.
During the attacks, “in the eyes of many people, I became president,” he said.
Hollande was elected president in 2012, becoming the Socialist Party's challenger after its perceived frontrunner, Dominique Strauss-Kahn, became embroiled in a sex scandal.
The country has two major elections next year — for the presidency, unfolding in two rounds on April 23 and May 7, and for the National Assembly, on June 11 and June 18.
Hollande has previously said he will not stand for re-election unless he makes a “credible” dent in France's unemployment rate.
On Thursday, the statistics bureau Insee said joblessness in mainland France in the second quarter of 2016 had fallen to 9.6 percent of the workforce.
This was the first time it had dropped below 10 percent since the third quarter of 2012.
According to an opinion poll published on August 4th by survey group Elabe, only 17 percent of electors say they trust Hollande to resolve the country's problems.