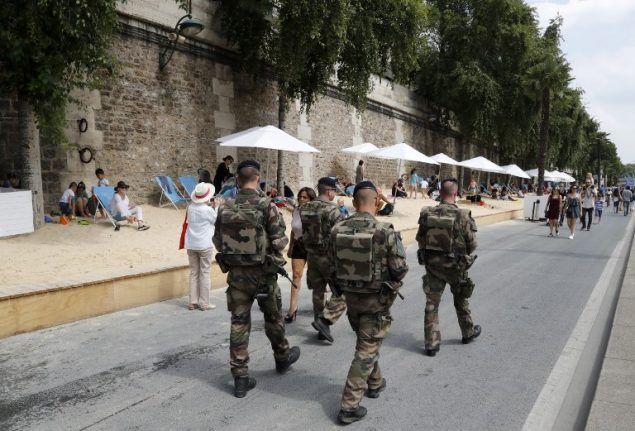 Soldiers patrol the Paris Plages at the River Seine. Photo: AFP
The EIU's survey assesses the liveability of cities based on a number of key factors, including stability and the quality of healthcare, culture, the environment, education and infrastructure.
Paris was the European city that saw the biggest decline in the study, dropping 3.7 percent on the scale and ranking 32 out of a total of 140 cities.
This was enough to see Paris feature on the list of the ten cities that faced the biggest declines, among others such as Damascus, Kiev, Detroit, and Tripoli.
The study blamed this on the “mounting number of terrorist attacks taking place in the city, and in other parts of the country, over the past three years”.
These include the July massacre in Nice where 85 were killed by a truck driver, the November attacks in Paris where 130 were killed, and the attacks in Paris from last January when 17 were killed.
The study noted that the high scores that Paris received elsewhere were enough to ensure that the decline would not actually push the city into a lower tier of liveability.
The researchers noted a “continuing weakening of global stability scores” due to increasing insecurity around potential threats, which are seen as more likely to happen in urban regions.
On average, the global stability score has fallen by 2.4 percent over the past five years, from 73.7 percent in 2012 to 71.3 percent now.
The list was topped by Melbourne in Australia, followed very closely by Vienna. Third, fourth and fifth went to three Canadian cities, Vancouver, Toronto and Calagary respectively.
The top ten was rounded out by Australia's Adelaide and Perth, followed by Auckland, Helsinki, and Hamburg.