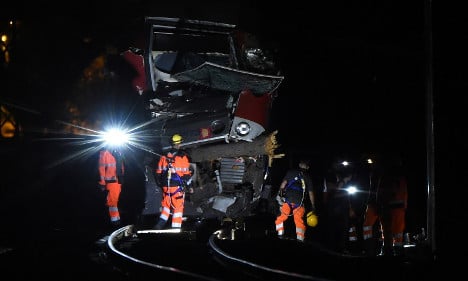 The regional TER train crashed at Lunel, which is between Nimes and Montpellier in the south of France (see map below).

“At Lunel at around 3:45 pm, a TER going at 140 kmh hit a tree which had fallen on to the track after extremely violent storms in the region,” national rail operator SNCF said.
The rail operator added that the scene was difficult to reach for firefighters and police.
Some 219 people were on board the train at the time of the crash.
Rescuers told the AFP news agency that eight people were “severely injured”, and that another fifty suffered
minor injuries.

At least one helicopter was at the scene to carry the injured to a nearby hospital while others gathered on the train tracks.

An image shared by the local branch of France Bleu showed a large tree that appeared to have completely covered the tracks.

Meanwhile, tweets from passengers (below) showed the damage from the collision, including what appears to be a hole in the wall of the train and glass from broken windows all over the floor.

Trains in both directions in the area faced severe delays following the accident.