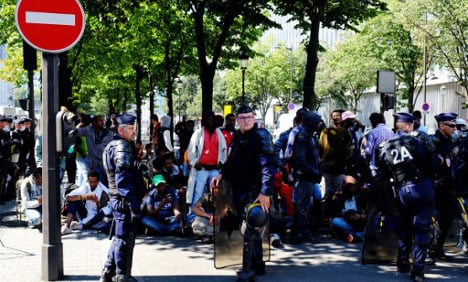 The makeshift camps had only been set up a few days earlier; and are regularly evacuated but often reappear shortly after.

The operation began at 8am and continued through the morning.

Drouet said that the migrants, who were of Afghan, Sudanese, Eritrean and Somali origin, had been taken to the local police station where they would receive any necessary report. Since the end of July, police have carried out over twenty operations to evacuate camps in the 19th arrondissement, where many camps have sprung up. During some of these evacuations, riot police were drafted in to help and police turned tear gas on the migrants.

Nearly 80,000 people applied for asylum in France in 2015, but it has been affected less than its European neighbours by the mass influx of migrants over the last 18 months.

Paris mayor Anne Hidalgo pledged at the end of May that the city would get a humanitarian camp, built to UN standards, in the coming months.