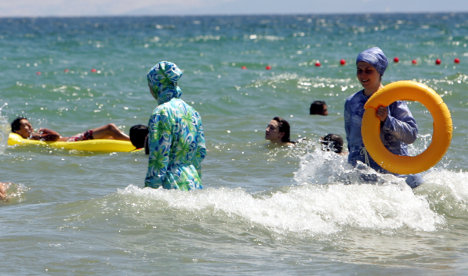 Photo: AFP
Prime Minister Manuel Valls also weighed in on the debate, lashing the wearing of the burqini as “not compatible with the values of France and the Republic” and saying he supported mayors who ban it if they acted in the public good.
In the southwest, the mayor of the resort town of Leucate, Michel Py, was to sign a municipal decree later Tuesday that would ban the burqini on public beaches, the town hall said.
The decree, which runs until August 31, will bar access to public beaches to “any person who is not properly dressed, respectful of moral behaviour and secularism, hygiene and bathing safety.”
“The wearing of bathing clothes which are associated with these principles is also forbidden,” according to the decree, seen by AFP.
Leucate is located on the Mediterranean coast, 35 kilometres (20 miles) from Perpignan.
In the northern French department of Pas-de-Calais, the mayor of the Channel town of Oye-Plage said Tuesday he would also move to ban the burqini after seeing a woman wearing “a complete cape and gloves, covering her face and her eyes” as she headed to the beach on Sunday.
In the nearby upmarket resort of Le Touquet, local mayor and MP Daniel Fasquelle said he would also implement a burqini ban in the coming days “to fight against religious proselytising.”
“There are no burqinis in Le Touquet at the moment, but I don't want the town hall to be caught offguard if we are affected by this phenomenon,” Fasquelle told AFP.
READ ALSO: 'Burqini bans will only divide France more' String of jihadist attacks
France has been hit by a string of jihadist attacks over the last 19 months that have left the country on edge and fretting over home-grown religious extremism.
Partly as a result, the burqini has become embroiled in a fierce debate about perceived religious symbols and their place in a strongly secular country. To critics, the garment is associated with an intolerant and sectarian strand of Islam.
On July 14 Nice was the target of an attack claimed by the Islamic State group when a Tunisian ploughed a truck into crowds celebrating Bastille Day, killing 85.
And on July 26, a priest was killed in his church in northwestern France by two attackers who had proclaimed their allegiance to IS.
The following day, the Cote d'Azur city of Cannes banned the burqini and the nearby resort of Villeneuve-Loubet followed suit in early August.
Beach brawl over burqinis
The Corsican town of Sisco on Sunday became the third to introduce a ban after a brawl in a cove between locals and families of North African origin left five people injured.
A witness said the violence broke out after tourists took pictures of women swimming in burqinis on the Mediterranean island. Investigators are still probing what happened.
The first ban on the burqini has been attributed to Mandelieu-la-Napoule, close to Cannes, where it was discreetly barred in July 2013.
The text of the municipal decree has been used, typically word for word, in bans elsewhere.
Cannes mayor David Lisnard said he had signed off on the burqini ban out of “respect for good customs and secularism”, a founding principle of the French republic.
But Villeneuve-Loubet mayor Lionnel Luca had a different argument, saying swimming “fully dressed… (was) unacceptable for hygienic reasons.”
The bans are opposed by some, who contend they are a populist ploy, violate human rights and likely to inflame tensions.
The Collective Against Islamophobia in France (CCIF) mounted an unsuccessful legal challenge to the ban in Cannes.
It is now taking its case to the Council of State, the highest judicial authority in France for administrative matters.
But Valls, in an interview published on Wednesday with the southern regional newspaper La Provence, said he supported the ban.
“I understand mayors who, at this time of tension, respond by looking for solutions, by avoiding disturbances to public order,” Valls said.
“I therefore support those who have passed (burqini) decrees if they are impelled by the will to encourage people to live together and not by ulterior political motives.”
Valls added: “Beaches, like all public areas, must be protected from religious claims. The burqini is not a new range of swimwear, a fashion. It is the expression of a political project, a counter-society, based notably on the enslavement of women.”
However, Valls ruled out a nationwide law to fight the burqini, saying “overall regulations on proscribing clothes cannot be a solution.”