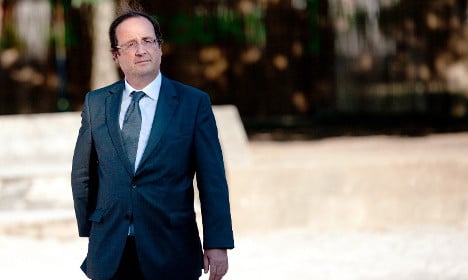 Photo: AFP
The Socialist leader was back at his office in Paris on Tuesday morning after a few days’ holiday at an undisclosed location somewhere in the south of France.
He managed to foil paparazzi attempts to photograph him on vacation with his actress girlfriend Julie Gayet, whose name he never utters in public and who he keeps well away from the prying eyes of the press.
It is all very different from his holidays in his first summer in office back in 2012, when he strutted bare-chested in swimming togs on a Riviera beach with his then girlfriend Valérie Trierweiler, herself clad in a black bikini as the couple prepared for a dip in the Med.
Photos of the couple were splashed across almost every French newspaper and news magazine.
But Ms Trierweiler was ousted from the Elysée a year and a half later when Mr Hollande’s affair with Ms Gayet was revealed by a gossip magazine that published a photo of him arriving for a tryst with his mistress on a scooter.
The president, who turned 62 last Friday, is still with the 44-year-old movie actress, refuses to discuss his private life and is never seen in public with his new partner.
All that is known about his holiday this summer is that he spent  the best part of a week  in the south of France with his grown-up children, whose mother is Segolene Royal, now France’s Environment Minister and who was Hollande’s partner for nearly three decades.
“Hollande plays hide and seek with photographers” was the headline in Monday’s Le Parisien newspaper, which quoted the head of a paparazzi picture agency as saying its photographers had been deployed all over the south to try and catch Mr Hollande with Ms Gayet on his arm.
But the paper noted that even if they did manage to grab such a photo, it would fail to excite as much as the shot of French Economy Minister Emmanuel Macron on a beach in Biarritz.
Paris Match magazine last week published a photo of the youthful minister, who may make a run for the French presidency next year, ogling the naked buttocks of a nudist emerging from the sea.