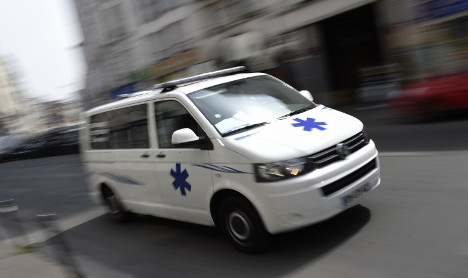 Photo: AFP
The toll of injured people has doubled after initial reports said that 40 people had been hurt by Sunday night's stampede at Riviera hotspot Juan-les-Pins.
That figure was revised to between 70 and 80, according to varying reports in the French media on Tuesday, with hospital patients ranging from people who had been trampled to people injured by broken glasses from overturned tables.
“My first reaction was just to think about what happened in Nice on July 14th,” one witness told BFM TV, referring to the evening when a man ploughed a truck into a crowd of Bastille Day revellers, killing 85.
“But then you don't even think, it's just acting on reflex.”
Exactly what prompted the stampede remains unknown, although many witnesses reported that a loud cracking sound resembled gunfire.
Local media reported that someone had thrown firecrackers from a car, although this is yet to be confirmed.
Police were examining CCTV footage and talking to witnesses to determine the exact cause of the incident, although they have ruled out that it was any kind of attack.
However, the local mayor is filing a police complaint suspecting malicious behaviour, reported BFM TV.
However, some kind of noise is understood to have set people in a state of panic, with video footage showing people overturning tables and chairs on the terraces of cafes and restaurants near the beach and people screaming in the stampede.
The incident came amid heightened tension in France after a string of attacks claimed by the Islamic State group, including the July 14th massacre.
A state of emergency was declared in France after November's Isis attacks in Paris which left 130 people dead.