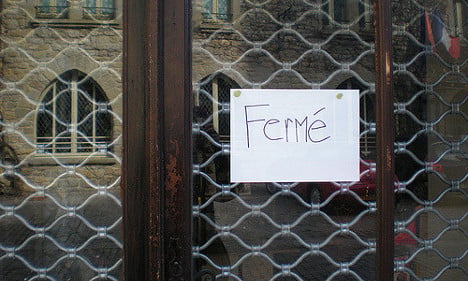 Photo: Losselith/Flickr
Patrick Brun must be one of the most stubborn restaurateurs in France.
He was sent an incredible €186,000 fine after he closed his brasserie at the Grand Var commercial centre, near Toulon in southern France, on Bastille Day in July.
While most shops and restaurants are closed on the day, his move was a direct flouting of the shopping centre's rule book, which took advantage of a new law allowing for more flexible opening hours and voted to open up on seven Sundays and six public holidays throughout the year.
But it appears Mr Brun either didn't learn from the decision, or simply doesn't care. On Monday August 15th, which was a public holiday, he didn't open his doors once again – even though everyone else in the shopping centre did.
It remains unknown if Brun will be sent another similar fine.
The last fine was apparently calculated on the basis of €10 per metre square of the premises for every five minutes that the café remained closed, so it would be safe to imagine a second fine would also be in the vicinity of €190,000.
And Brun isn't going down without a fight. The Frenchman launched a petition hoping to win public support after the first fine, garnering over 3,500 signatures.
“A €186,624 fine for not having forced my staff to come to work on the symbolic day of July 14th!” an angry Brun wrote at the time, calling the fine “shameful”.
“Stop the abuse of shopkeepers and staff at the Grand Var commercial centre,” he added.
According to Var Matin newspaper the group that runs the commercial centre responded by saying: “It's not normal that shopkeepers don't respect opening hours that were voted through by the general assembly.”