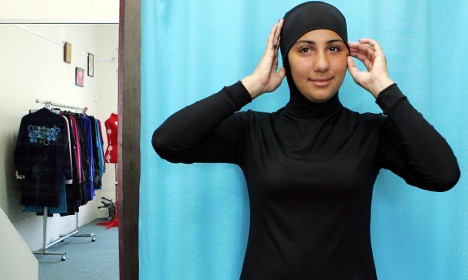 The Riviera resorts of Cannes and Villeneuve-Loubet have also banned the garment from their beaches in recent weeks, at a highly sensitive time for relations with France's Muslim community following a series of jihadist attacks.

The new ban in the Corsican village of Sisco comes after a massive brawl on Saturday. It is not entirely clear how the fight broke out, but one witness said it happened after tourists took pictures of women swimming in burqinis on the Mediterranean island.

Five people were injured and three cars were burned as the rival sides hurled stones and bottles. A hundred police officers were mobilized to break up the fight.

Prosecutors in nearby Bastia said an inquiry had been opened to determine how the clashes broke out.

Sisco mayor Pierre-Ange Vivoni said burqinis would be banned in the area from Tuesday. The burqini issue has sparked huge controversy in France, with opponents saying the garment goes against French secular principles, but anti-racism campaigners saying that banning women from wearing it amounts to discrimination.

Islamic dress has long been a hot-button issue in France, where the full-face veil is banned in public places. The row comes as tensions run high following several attacks in France claimed by Isis, including last month's Nice massacre when a man ploughed a truck into crowds celebrating Bastille Day, killing 85 people.

France has been under a state of emergency since Isis members killed 130 people in Paris in November.

In Corsica, there were tense scenes on Sunday as around 500 people gathered in the town of Bastia, seeking to enter the Lupino district which is home to a large North African community.

“We're going up there because this is our home,” they shouted. Police blocked them from entering.

A local festival planned for August 15th has been cancelled, Vivoni said, but he told AFP this was “not for security reasons but because residents are not in the mood”.

A series of incidents in Corsica have raised tensions between local Muslims and their neighbours. In December, protesters vandalized a Muslim prayer hall and trashed copies of the Koran after an assault on firefighters that was blamed on youths of Arab origin.

Last month Corsican lawmakers called on the French state to close down radical mosques on the island, after an underground separatist movement issued a threat against Islamic extremists. A splinter group of the nationalist Corsican National Liberation Front (FLNC) warned Islamists that any attack on the island would trigger “a determined response, without any qualms”.

The burqini ban in Cannes won court backing on Saturday, with a judge ruling that it goes against secularism, a founding principle of the French republic.

In the nearby Riviera resort of Villeneuve-Loubet, mayor Lionnel Luca has justified the ban by saying it is unhygienic to swim fully-dressed.