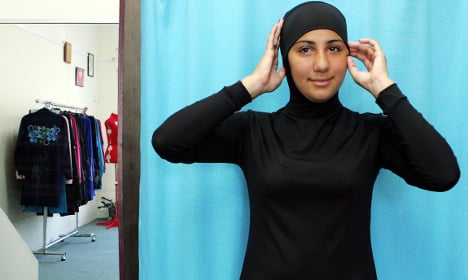 Prohibiting the burqini has caused an uproar with anti-racism organisations and human rights groups vowing to go to court. Photo: AFP

The town's mayor told AFP that he made the decision to bar the burqini worn by some Muslim women because of sanitary reasons.

“I was informed that there was a couple on one of our beaches where the wife was swimming fully dressed,” Lionnel Luca said.

“I considered that unacceptable for hygienic reasons and that in general it was unwelcome.”

The mayor of Cannes, famous for its annual film festival, said he had signed off on the burqini ban out of “respect for good customs and secularism”, a founding principle of the French republic.

But prohibiting the burqini has caused an uproar with anti-racism organisations and human rights groups vowing to go to court to seek to overturn the “deeply worrying” ban.

In the city of Marseille this week, a waterpark cancelled plans to host a private event for women wearing burqinis after the idea sparked an uproar.

The issue comes at a highly sensitive time for relations with Muslims in France after two attacks last month linked to the Islamic State (Isis) jihadist group.

Mayor Luca referred to the attacks in disputing charges that the burqini ban was discriminatory, saying it was intended “to avoid any disturbance to public order in the region which was hit by attacks”.

On July 14th the nearby Riviera city of Nice was the target of an attack claimed by Isis which killed 85 people, when an Algerian ploughed a truck into crowds celebrating Bastille Day.

And on July 26th, a priest was killed in his church in northwestern France by two attackers who had proclaimed their allegiance to Isis.

Islamic dress is a hot-button issue in France, where the full-face veil is banned in public places. But there is no ban on wearing religious symbols or clothing.