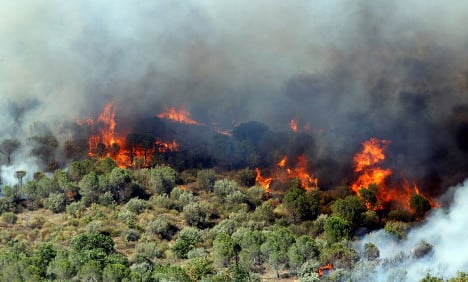 On Thursday it was the turn of residents in a corner of south west France to flee from forest fires.

The lack of rain, hot summer sun and strong winds have been causing serious concern for firefighters in the south of France with the latest bush fire breaking out near the city of Perpignan.

Before firefighters could get it under control the blaze had burned across 1,100 hectares of scrubland near Montalba-le-Château, forcing the evacuation of around 60 homes.

Other residents were ordered to stay home and not venture outside.

Several roads had to be closed with around 400 drivers having to spend the night in makeshift accommodation after being rescued by emergency services. Rail services between Perpignan and Villefranche-de-Conflent were halted on Thursday and had not started up again by Friday morning.

Although firefighters were able to get the blaze under control by Thursday evening, some 350 military personnel, specialized in firefighting remained in the area to make sure new fires did not ignite.

On Friday morning Canadair waterbombing planes were still in action to extinguish the last of the flames.

Authorities reported fires breaking out in some 30 different locations. Although many were started accidentally, some are believed to have been ignited on purpose.

Over in Marseille a man was arrested on suspicion of causing a wildfire a day after some 3,300 hectares of scrubland were burned on the northern outskirts of Marseille.