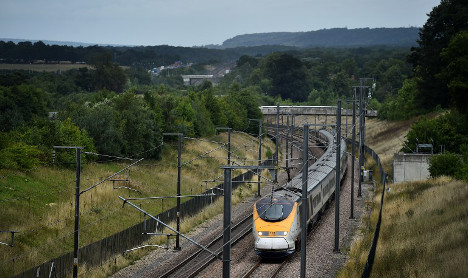 Photo: AFP
The Rail, Maritime and Transport Workers' Union (RMT) said its members should have “a fair crack when it comes to anti-social hours”.
Eurostar said that all passengers booked to travel would be able to do so. In total, under four percent of services across the four days will be hit, it added.
On Friday, only the 8.04am (0704 GMT) service from London to Brussels and the 12.52pm (1052 GMT) service from Brussels to London were being cancelled.
No services will be cancelled on Saturday and four between London and Paris will be cancelled on Sunday as well as two more between the British and French capitals on Monday, it added.
Monday is a public holiday in France and Belgium and the strike comes during the busy summer holiday season across Europe.
Another strike is due to be held for three days over the weekend of August 27, which includes a public holiday in Britain.
“We have made some small changes to our timetable with all passengers due to travel on affected trains notified in advance to allow them to change their booking to another train on the same day,” Eurostar said in a statement.
RMT general secretary Mick Cash said talks were due to be held on Friday morning.
“Our Eurostar train manager members are solid, determined and united this morning as they kick off the first phase of strike action in a fight for a decent work/life balance,” he said.
“Pickets are out at St Pancras International (Eurostar's London terminus) as we send the message to the company that we expect them to honour basic agreements with the union that date back eight years.”