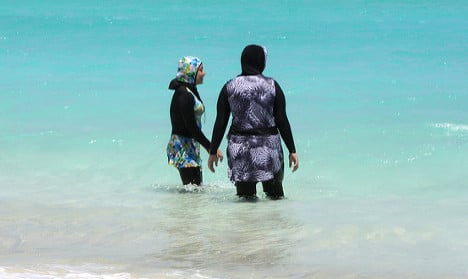 Muslim and human rights groups have lined up to slam a decision by the mayor of the Riviera resort of Cannes to ban women in burqinis – full body swimsuits, from accessing the beach.

As might have been expected the decision has been met with a mixture of anger, astonishment and ridicule by rights groups and Muslim associations.

From now on any Muslim woman who ventures down to the beach at Cannes in a burqini could be subject to a €38 on-the-spot fine.

It’s not just the ban itself that has angered opponents, but the Town Hall’s justification for it.

Authorities claimed it is needed to prevent outbreaks of public disorder, and then appeared to suggest any Muslim woman wearing the burqini is a terrorist.

The Town Hall argued that by banning the burqini they are not targeting all Muslim women, only “extremists”.

And Thierry Migoule the head of municipal services went a step further saying: “We are not talking about banning the wearing of religious symbols on the beach, but ostentatious clothing which refers to an allegiance to terrorist movements which are at war with us.”

Feiza Ben Mohamed, the spokeswoman for the Southern Federation of Muslims told The Local that not only was the ban discriminatory but it played into the hands of the real terrorists France is at war with.

“Here in France we have a principal of secularism… but this law only talks about Muslim women,” Ben Mohamed said.

“The mayor talks about protecting public order, which means he thinks the presence of a Muslim woman on a beach will cause trouble,” she added.

“He also invokes the fight against terrorism so he is basically saying a Muslim woman who wears a burqini is a terrorist.

“Yet again it’s ordinary Muslims who pay for the actions of terrorists even though they had nothing to do with it,” said Ben Mohamed.

“This is exactly what Daesh (Isis) want.

“They are trying to recruit young people in France and they will be saying to them, ‘look, France stigmatizes Muslims; look, France won’t let you wear the veil’.

“At a time when politicians should be doing everything to avoid tension between communities, they have done exactly the opposite,” she added.

Under the so-called 2011 “burqa-ban” in France, women are barred form wearing full face veils in public but they are not banned from wearing burqinis, which normally cover the whole body, but not the face.

France’s Collective against Islamophobia (CCIF) is helping ten Muslim women bring an urgent case against Cannes to try and get the ban overturned.

“These women are not radicalized, they are just ten young women from Cannes who can no longer go to the beach because they wear the veil,” said Ben Mohamed.

Authorities in Cannes say they have noticed a rise in the number of women wearing burqinis on the beach, but the local Muslim association suggests that may have something to do with the number of holidaymakers from Saudi Arabia who come to the Côte d’Azur in the summer – whom French resorts have done everything to attract, rather than local women.

READ ALSO: Saudi Royals grab Riviera beach all for themselves The head of the local branch Hervé Lavisse told The Local the ban was “absurd, ridiculous, counter-productive” and said it would it would be overturned within seconds in a court of law.

“It’s completely absurd. What are they going to do next, ban men from having long beards?” said Lavisse. “Do they think these women are hiding Kalashnikovs underneath the burqinis?

“It’s just another counter-productive measure that stigmatizes the Muslim community and is aimed at winning right-wing and far-right voters before next year’s elections,” he said.

Like Feiza Ben Mohamed he said the mayor was acting as a “perfect recruiter for radicalization”.

“It is time for politicians in this region to calm their discriminatory zeal and defend the spirit of the French Republic,” he said.