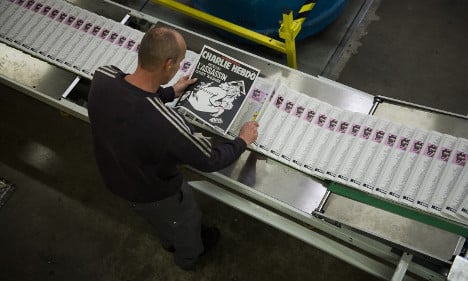 Photo: AFP
The latest issue of the controversial satirical magazine Charlie Hebdo features a naked man and woman running towards the shoreline of a beach.
The man's penis can be seen through his long beard, and the woman is totally naked except for her veil over he head and shoulders.
The caption reads “The reform of Islam: Muslims, loosen up” or “Musulmans decoincez vous”.

The issue was released on Wednesday, and quickly drew threats on the Facebook page of the publication.

Charlie Hebdo staff reported the matter to the police, according to Le Parisien newspaper.
The magazine's writers continue to work under heavy police protection ever since terrorists carried out an attack on the publication in January last year, killing 12 people, most of them workers at the magazine.
The attackers claimed it was revenge for the magazine's controversial drawings of the Prophet Mohammed, which is forbidden under Muslim law.
The publication received more threats during the Euro 2016 football tournament after they posted a picture of French player Antoine Griezmann in the shape of a sex toy.