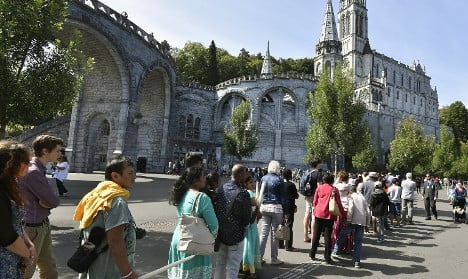 People gather during the annual Catholic pilgrimage at the sanctuary of Notre Dame de Lourdes. Photos: AFP
Each year, tens of thousands flock to the sanctuary in the foothills of the Pyrenees for the Feast of the Assumption on August 15, marking the ascent of the Virgin Mary into Heaven.
This year's pilgrimage comes as Catholics reel from the killing of an elderly French priest on July 26 by two Islamist extremists, who stormed his church in northern France during Mass and slit his throat.
Jacques Hamel's murder came under two weeks after a Tunisian — said by investigators to have become radicalised by online jihadist videos — ploughed a truck into a Bastille Day crowd in the Riviera city of Nice, killing 85 people.
Many in France are now leery about attending public gatherings after three large-scale attacks in 18 months.
With tourist arrivals in the country plummeting, authorities had worried that the number of visitors to this year's pilgrimage would be sharply down.
But fears of mass cancellations have failed to materialise — and some organisers say there has even been a last-minute surge.
Around 25,000 faithful are expected, including mass groups from Italy and Belgium and a delegation of around 200 members of the Eastern Orthodox branch of Christianity.
Many pilgrims say they will not be cowed.
“We're not going to stop living,” Christian, a 66-year-old visitor, told AFP, describing prayer as the “only weapon” in the face of violence.
“It's important to show that life goes on,” said Matthieu Guignard, one of the coordinators.
“It's not because a few fanatics try to sow fear that we should abandon our faith, our beliefs, our way of living.”
Surprise bookings spurt
Several major events have been cancelled in France since the Nice attack over security concerns, including a huge flea market in the northern city of Lille and the European road cycling championships that had been set to take place in Nice in September.
“For the past week, my fear was that my phone would be ringing with cancellations,” Fabien Lejeusne, the priest in charge of the official pilgrimage said last weekend.
Instead, the attacks appeared to mobilise the faithful, he said, reporting a last-minute bookings spurt.
The head of the local hotel workers' union, Christian Gelis, confirmed signs of “increased interest” in the pilgrimage in the wake of the attacks.
Security has been dramatically tightened around the sanctuary built around the shrine, where the Virgin Mary is said to have appeared in a grotto to Bernadette Soubirous, a poor shepherd girl, in 1858.
Around 250 police and two dozen soldiers, including bomb disposal experts and officers with sniffer dogs, have been deployed to protect the area.
Pilgrims filing through security barriers have their bags searched at the entrance to the site, where the number of access points has been reduced from a dozen to three. Catherine Simcox, who made a pilgrimage from the north east of England to Lourdes earlier this month described the heightened security.

“By Thursday morning, there were armed guards inside the sanctuaries and then the gates became single file entry (with metal barriers) with bags being searched on the way in,” she told The Local.

“This total freaked my three kids out who are used to Lourdes & it was hard to not scare them when they asked why it was happening,” she said.

“It didn't spoil my experience, but it saddened me that it was necessary and I understood that some people were reassured by the measures.”

The route of Friday's opening procession has also been curtailed — instead of starting in the town of Lourdes and proceeding to the sanctuary, it will start and end at the shrine.
Other measures taken including shutting down the airspace above Lourdes to flights, closing off the streets around the sanctuary to traffic and replacing rubbish bins with transparent plastic bags.
Interior Minister Bernard Cazeneuve is to inspect security arrangements on Saturday.
Lourdes attracts around six million people a year, making it one of the biggest sites of Catholic pilgrimage in the world.
Many visitors bring sick or disabled relatives, who come to bathe in a spring in the cave where Bernadette said she saw Mary, believing the water to have healing properties.
Thierry Castillo, another of the organisers, described this year's gathering as “a bit unusual” given “the threat that seems to have taken root in France.”
But “it won't affect the quality and depth of what they experience,” he assured.
Francoise, a 58-year-old volunteer who was assisting sick pilgrims, admitted she found the presence of soldiers in fatigues “a little overwhelming”.
“But if it reassures everyone, it's good.” 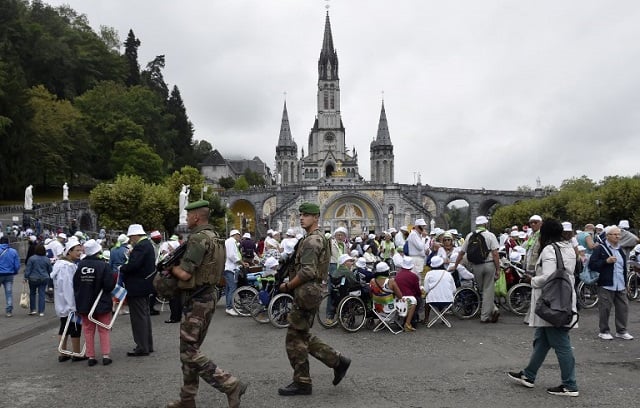