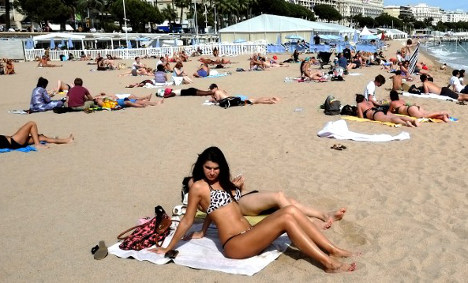 The mayor of Cannes has banned the wearing of burqinis — full-body swimsuits — on the beaches of the French Riviera resort famous for its annual film festival, officials said Thursday.

Mayor David Lisnard signed off on the ruling that “access to beaches and for swimming is banned to anyone who does not have (bathing apparel) which respects good customs and secularism,” which is a founding principle of the French republic.

“Beachwear which ostentatiously diplays religious affiliation, when France and places of worship are currently the target of terrorist attacks, is liable to create risks of disrupting public order (crowds, scuffles etc) which it is necessary to prevent,” it says.

Speaking to Nice Matin newspaper Lisnard added: “I don't have the time, nor the desire to stir up trouble. We have not banned the Muslim headscarf, the kippah, nor a crucifix , I have just banned something which is the symbol of Islamic extremism.

“We live in a common public space so there are rules to respect,” the mayor added.

Thierry Migoule, head of municipal services for the town, sought to clarify the ruling's intent.

“We are not talking about banning the wearing of religious symbols on the beach … but ostentatious clothing which refers to an allegiance to terrorist movements which are at war with us,” he said. Feiza Ben Mohamed from the Southern Federation of Muslims said Cannes was acting above the law and vowed to fight to force the mayor to overturn the ban.

She criticised what she saw as hypocrisy by authorities allowing members of the Saudi royal family on holiday in the area to wear burqinis but not local French women.

“The mayor is basically saying anyone who wears a burqini is a terrorist. He is creating tension between the state and the Muslim community at a time when he should be doing everything to avoid it,” Ben Mohamed told The Local.

SHe believes the saddest aspect of the controversy is that it plays into the hands of Isis.

“They are desperately trying to recruit young French people. They will be saying to them, 'look France stigmatises Muslims', look France won't let you go to the beach'. That 's exactly what they want,” she said.

On Friday morning France's collective against Islamophobia announced it would lodge a legal complaint to over rule the mayor's bylaw.

The local branch of the League of Human Rights also denounced an “abuse of the law” and vowed to take on the mayor of Cannes through the courts.

“Does our mayor have a catalogue of the clothes that will be allowed on the beach of Cannes and in the streets?

“By such an exclusive and repressive attitude it’s not fear that some of our compatriots will feel excluded from the city.”

On July 14 the nearby Riviera city of Nice was the target of an attack claimed by the so-called Islamic State group which killed 85 people, when a truck ploughed into seafront crowds celebrating the French national holiday.

On July 26 a priest was killed in his church in northwestern France by two attackers who had proclaimed their allegiance to Islamic State.

Islamic dress is a hot-button issue in France, where the full-face veil is banned in public places. But there is no ban on wearing religious symbols or clothing.

Migoule said that no burqini had been seen on any beach in Cannes since the ruling was signed into force on July 28 by Lisnard, a member of the centre-right Les Republicains party.

Earlier this week a waterpark in nearby Marseille cancelled plans to host a private event for Muslim women wearing burqinis after they sparked outrage, including from politicians on both the right and left.

The local mayor Michel Amiens told the local France Bleu radio station on Tuesday that he had pulled the plug to “calm the situation”.
“The manager of the pool had not considered the sheer emotion that organizing this event could generate,” he said.
“We saw the reactions on social networks that were completely outrageous, Islamophobic, xenophobic, and racist, which I totally condemn, but given the circumstances, we have to cool things off.”
Indeed, the organization behind the pool party, Smile 13, said that its members had even been sent death threats after news of the party broke out.